Jim McGuinness: Sadly I must wash some dirty linen in public

This isn’t about a holiday, it’s about respect for people who have given their all to Donegal 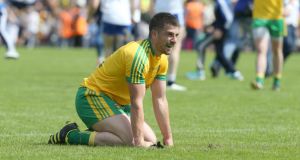 Donegal’s Paddy McGrath collapses to the ground dejected at the end of this year’s Ulster SFC final against Monaghan. Photograph: Inpho

The end of the All-Ireland season brings about an instant rush of evaluation and questions. There is a clear winner and an immediate loser and for both of those counties, the experiences of euphoria and disappointment are acute.

But for almost all other counties, autumn means planning ahead and, for senior players and managers, asking themselves if they want to give it another year.

‘Sacrifice’ is a word you hear used a lot now in relation to the time and energy and honesty which players and those in the background pledge to any All-Ireland season. I feel that it’s more complicated than that. Players and coaches and backroom staff are there because they want to be there and they are committing to something they believe in and feel passionately about.

For the players, it is even more straightforward. You are playing for your county. Whether you have had a good or bad season, you have worked really hard to make that happen. I am a county player: there is a prestige that goes with that. And maybe it will lead to a job or meeting a girl, all that comes with it. But playing for the county does dictate how a player lives his life in a way that certainly wasn’t true when I was playing county football.

Every so often I think about the things that the boys did when I was in charge of Donegal. I think of Karl Lacey and David Walsh setting their alarms to get up in the middle of the night to ice their hamstrings. I think about Karl going immediately from the birth of his first child to Johnstown house for a training camp. These aren’t sacrifices in the biblical sense but they are examples of extreme commitment.

Well, in some cases young men stay in order to play football for their county. They have no other compelling reason. This, I feel, constitutes a sacrifice. Some of the boys in Donegal did that. Now, they did it because they wanted to be part of something they believed in. It was their choice. But it was a huge show of faith in Donegal football by them. They were staying to play.

And I think sometimes about the car-load coming from Dublin. Michael Murphy when he was in college. Paul Durcan, Declan Walsh and Antoin McFadden and Paddy McGrath; big men to be unfurling themselves from a car during a time when we were really asking questions of ourselves at training and when the ethos of the squad was about how far we could push ourselves.

And then getting back in the same car at 10 at night and landing back in the city at one or so for work or college the next day. They were facing that journey shattered. I never envied them the drive.

Winning Ulster championships and the All-Ireland in 2012: that was magical. It is probably among the best feelings you could hope to experience in life. But I do feel that the rewards of being involved in any Gaelic football squad are largely spiritual rather than tangible.

We often note that foreigners who happen upon Gaelic games are astounded by the fact that it is amateur; that the players are doing this for what, in monetary terms, amounts to nothing.

Explaining the currency of a hard-won provincial championship or an All-Ireland is a complicated thing. But for most of the players and backroom staff involved, it requires many hours of dedication and repetition when most of the country is hunkered down indoors. From October or November right through to the summer every Tuesday, Thursday, Saturday and Sunday. It is a long stretch.

In Donegal, seven of last year’s squad who were, for various reasons, unable to travel on the official holiday to Dubai, have yet to receive any sort of holiday voucher from the Donegal county board. As it happens, I am one of the seven. But I wouldn’t be addressing this if this concerned just me.

These people have put their lives on hold for their county and their beliefs. Paddy McGrath has played in an All-Ireland final and yet he can’t go on holiday because he took all his time off so he could attend training weekends? I feel that is just wrong.

John Duffy was a selector on the team. We played Antrim in the championship and I noticed he wasn’t in the dressingroom afterwards. I asked where he was and I was told he had to race home because his son Oisin was making his first communion. He never said a thing about it: he just turned up for the match. I think that is what people mean when they talk about ‘sacrifice’. John is a former county player and he gave his time all year. As it turned out, he wasn’t able to go on the holiday because of other work commitments.

The official word from the Donegal county board was that if people couldn’t travel on the team holiday, then that was it. But the information I obtained from Croke Park is that if you couldn’t attend a team holiday, then you are entitled to a voucher for whatever the holiday was worth.

The county board suggested that there was an implication with revenue; that would be true if you got the benefit-in-kind but if you received an actual holiday voucher, then it is just that – an opportunity for people to take the holiday they were entitled to.

They said that the people unable to travel were entitled to a holiday. I have stayed silent about this because I didn’t want it to impact on Donegal’s preparations for the championship or on the new management team. But now the year is over I feel it is my duty to come out and speak about it. I feel that all of these people put their lives on hold to improve Donegal football and they weren’t in a position to enjoy what is a fairly modest gesture of thanks at the end of it. This is an amateur organisation but these boys lost out because they had to make up on their work as they took so much time off to devote to Donegal football.

Something is not adding up.

John has written an article about the issue and there have been various reports about it but it is all sort of brushed under the carpet. It is as if the county board wanted it to go away. Nothing has come out of it. So I feel it is my duty to the boys to make sure that they are given fair treatment.

There is this old thing about Donegal washing dirty linen in public. I am doing that now because there is no other option. We have been months trying to sort this out and have established that those who run our games are in favour of the boys receiving a holiday voucher but it still hasn’t been sorted out some 10 months later.

It isn’t about the holiday as much as respect. This is such a small thing but it shouldn’t be an issue. People should be tripping over themselves to make sure the boys get some little bit of thanks for all of the untold hours they put in.

We created whatever we created around the idea that we are all in this together. And so this feels like a postponed duty of my former role as Donegal manager: to do the best that I can for the group that I was in charge of. And I had to wait almost a year to do it because I couldn’t intrude on the preparation of the boys this year. That would have been unfair.

But now we are reaching the stage of the year where the two All-Ireland teams will be planning for holidays and All-Star tours will be coming around and it seems wrong to me that my own county hasn’t responded to a plea for fairness from people who have given so much.

It feels as if they were punished.

1 Liverpool’s Klopp responds to Donegal schoolboy who asks him to stop winning
2 England coach Eddie Jones apologises after making ‘half-Asian’ comment
3 Six Nations: Ireland v England all you need to know guide
4 Ireland wary of Peyper calling the tune as they head for Twickenham
5 Owen Doyle: Day of the jackal may be coming to an end
Real news has value SUBSCRIBE

Tyson Fury’s best chance is to do what Ali did better than anyone: dance 17:59
Federer knee surgery sparks fears that time is running out 17:38
England coach Eddie Jones apologises after making ‘half-Asian’ comment 16:39
Alessandro Zanni returns to Italy side for Rome clash with Scotland 15:40
Liverpool’s Klopp responds to Donegal schoolboy who asks him to stop winning 15:29
Here is your handy guide to sport on television this week