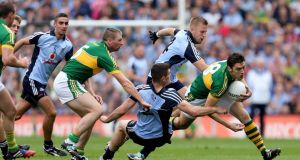 Kerry will expect David Moran to capitalise in centrefield against Dublin in the All-Ireland football final at Croke Park on Sunday. Photograph: James Crombie/Inpho.

The more things change, the more they say the same. Kerry and Dublin is often described as the dream final. But whose dream?

What we can say is that the two best teams in Ireland have made it through to September and, in the immediate context, there is a really intriguing game of football to look forward to. But overall, this championship summer has not promised much in terms of other counties breaking through in the years ahead.

All-Ireland final week is funny. It is the high point of the season and so much energy and debate is concentrated on the game and, for the two counties involved, it really is a fantastic time. Normal life is suspended. But for all other county teams and managers, the next season has already begun. For some, it will involve a period of reflection but for other managers, this is the busiest time of year. They will be putting systems in place for their players, figuring what they need to do to strengthen their squad, devising strength and conditioning programmes for players who may be lacking in that area, scoping the club games with a view to finding new talent, trying to plan their season and get their schedule together in terms or training and gym work and the training ban. Budgets. When to start training. Injuries. Attitude. Their thoughts are already on next year and this is a furiously busy time.

This inhibits other challengers and it requires a really bold and clear headed approach. During my time in Donegal, we had our detractors. That was fine: people are entitled to their opinion. But I’m not sure that they fully understood why we set up as we did. It was in order to get our foot in the door so we could disrupt and challenge the top tier.

I gave a talk in Laois during the week and met a man involved in Kilmacud Crokes. I was taken aback to learn that they have over 900 kids showing up for underage training. One age group alone had 120 kids. I am not sure we have that number in Glenties from under-eight through to minor. It becomes a numbers game. The cream will come to the top because of coaching and desire and self-determination. It is hard to compete with that. A young footballer with athletic potential in Dublin is entering a different realm of expectation and goal-setting than a young footballer with the same potential in Longford.

I think that no matter what happens Dublin and Kerry will always field very strong teams. That introduces a sense of inevitability about the future. The gap seems to be getting bigger. It is very difficult not to see Dublin and Kerry contesting many more All-Ireland finals in the years ahead. It is so difficult for teams to break that trend. This is a big question for them to ask themselves this winter.

Are teams trying to do that – win the All-Ireland? Or are they merely trying to progress and do their best? Because there is a world of difference. Do they have clear, cold objectives of how they want to make an assault – for it is that – on the establishment? I do think that Cork, Mayo and Donegal have the potential to win an All-Ireland title in the next three years but it is very dependent on variables: on the management, on getting a decent draw in the championship, on key players hitting form – and not being injured. For Kerry and Dublin, those variables are not quite as important because of their strength in depth allied to tradition.

Like, is this it? Is this what the All-Ireland football championship is going to be? This is the question. How do we progress the game so that we have eight to 10 teams genuinely competing for the Sam Maguire at a very intense, close level? That is a different championship for me.

The gap will widen. Success breeds success. There is truth in that cliche. And there is a lot to look forward to a Kerry-Dublin championship clash. But there is something depressing about the idea that that should be the inevitable, climactic match of the All-Ireland season.

It is almost as if people have this romantic notion that it should be Kerry and Dublin every year and that they don’t want other counties competing. If so, they are in for many happy Septembers.

So which county is going to add to the harvest of All-Ireland Septembers? In what is an even contest, I have a slight inkling that Dublin will win.

There are key battle grounds. The interesting thing for me is that Kerry are defending All-Ireland champions and, having studied them last year and watched them this year, I don’t notice a big difference in what they are doing. If I was Éamonn Fitzmaurice, that would leave me a little bit uneasy. Yes, they are getting success but every time you play you give teams a greater insight into your system. And the more often you play, there is a greater chance of being cracked. They have a clear option of one type of attack versus another – meaning Paul Geaney or Kieran Donaghy. They have a high-quality forward line and a big, physical ball-playing midfield axis. Defensively, they try to turn the ball over as you attack them and drop back to their 45. They make it difficult to play through them and tackle with an edge and if you are not well conditioned in terms of finding that ball for the inside forwards, there is a tendency for teams to cough the ball up in that area, to fall into traps and run out of ideas.

My feeling is that this won’t happen to Dublin as they really like to kick the ball into their full-forward line. If Kerry persist in leaving that pocket of space left and right of their full backs, then Dublin have the potential to exploit that. Their inside forwards make strong runs and these are not just token runs: they tend to have purpose and an end result. It may lead to Kerry playing a sweeper left and right to protect that space.

This final is congested with quality forwards. In their starting lines and on the bench, they have options that other counties do not have. That is a general element of the final but it leaves both managers with big decisions.

Dublin have changed to the point that I’m not convinced that Kerry can be 100 per cent sure of what they will do on Sunday. For instance, Dublin were flexible enough to change things between the drawn game and replay against Mayo. They may tailor their game plan again not to suit Kerry. They have that creative approach now. Cian O’Sullivan’s fitness is a big factor for me. He has been central to their defensive system this year and has always been a hugely versatile figure in their team. He needs to be right for this team in order for the Dublin machine to work optimally. It will be interesting to see who they have been using as a shadow role in case Cian is not fit.

Kerry also have decisions to make here. Do Kerry go with the dynamism of Geaney or a point of attack in Donaghy. Dublin proved against Mayo that they can handle a big man on the edge of the square. Dublin do give opportunities for one versus ones and two on twos. But how you get the ball in is critical to whether a team can exploit those. Kerry will have worked on this at training but also they have enough intelligent creative ball players to keep the ball away from the Dublin defenders. This means that they could get some really intelligent dink ball off the shoulder and go close to the sideline and kick into Donaghy on the diagonal at the back post.

I just feel that the natural instinct of the Dublin team is to go direct and as it happens that is the one area of vulnerability within the Kerry team. When you look at the All-Ireland semi-final: when Tyrone just threw the shackles off and played with uninhibited attacking adventure, they created goal chances. Dublin thrive in that environment. If you flip it, you could say that the long ball in for Kerry could work. Crucially, I feel that Dublin will not be as porous through the middle because of the work they have carried out on their defensive system throughout the season. I think that the shift in emphasis they have made here combined with their explosive attacking game should be enough to enable them to squeeze past by two or three points.

All-Ireland final Sunday is a special day on the calendar. This year’s edition is rich with quality footballers and hopefully that will be reflected in the quality of the match. Best of luck to both teams.

1 Gordon D'Arcy: I know what Joe and Cheika would do. Fix the basics
2 Darragh Ó Sé: Cork and Donegal went out with the wrong attitude
3 Simon Easterby admits Ireland may need to take new line on maul
4 Can Solskjaer’s Man United find their groove when it matters?
5 Sean Moran: Bloody Sunday centenary weekend will live long in the sporting memory
Real news has value SUBSCRIBE