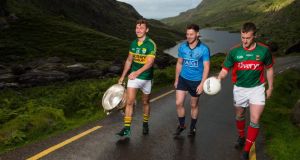 At the launch of the All-Ireland senior championship series at the Gap of Dunloe were from left, James O’Donoghue, Kerry, Dublin’s Philly McMahon and Mayo’s Cillian O’Connor. Photo: Brendan Moran/Sportsfile

James O’Donoghue can’t help it if he’s lucky. So he admits Kerry have seen the sunny side of it again this summer, then describes as “absolutely horrendous” the suggestion this luck is somehow contrived.

Luckily for us, O’Donoghue sees the sunny side of it too, calming addressing the question of whether or not Kerry were trying to influence the referee in their Munster football final draw – and subsequent replay – against Cork. Such as a wink here, or a word there?

“You think a player having a word, or a wink, is going to influence the referee’s decision?” asks O’Donoghue. “That’s not true, and referees probably deserve more respect than that.

Indeed only certain articles suggested it (wink: not here), and for O’Donoghue, it’s a simple case of misinterpretation: the 2014 footballer of the year, speaking at his home club in Killarney at the launch of the All-Ireland football series for 2015, understands how some people get it so wrong.

“You might see something on the field, when you are in the stand, and you make something out of it in your head, which isn’t the case. The referee might want to say to the player ‘calm down a bit there’, but then in the stand, everyone thinks the player is trying to influence the referee, or the referee’s decision. That is not the case at all, and I think it has been blown out of proportion.”

All that, however, doesn’t mean luck has nothing to do with Kerry being where they are. Because O’Donoghue, commenting for the first time on the penalty awarded to him in the drawn Munster final, admits that call could have gone either way. Indeed the Cork players, for what it’s worth, appeared equally intent on influencing the match referee (Pádraig Hughes from Armagh) once he signalled for the penalty, after O’Donoghue got tangled up in Cork’s sweeper, Mark Collins.

“I know it was a contentious decision,” says O’Donoghue. “Would I have given a penalty? I’m not sure. But there was a coming together, and the referee had a decision to make. It was very 50-50. One team can be lucky, and the other unlucky there. Either way, it was always going to be a tough call.

“At that time, we were three points down. So it wasn’t panic stations, by any means. I still think we would have tipped on a few points if we hadn’t got the penalty. But it is a nice boost to get a goal when you are down, because it completely flips it.

“Then they did the same thing, with Barry O’Driscoll, when he came down, and got a goal against us (almost immediately after). It is a big momentum shifter, to get a goal, when you are losing.

Still, even if that penalty call will always be open to interpretation, O’Donoghue still had to convert it – that task not helped by some of the Cork players perhaps trying to influence his concentration.

“Well, if you take your mind of the penalty, you are going to miss it,” O’Donoghue says. “When I went down, I was thinking ‘he could give a free here’. Then it ended up being inside the box. So I had probably two minutes between the penalty been given, and hitting it. It is a concentration thing. You have to tune in and don’t let anyone get inside your head, don’t let anyone get inside your ear, and just make sure that you put the penalty away.

With Kerry now lined up to face either Westmeath or Fermanagh in their All-Ireland quarter-final on Sunday week, O’Donoghue has other things to worry about now although he accepts that being the All-Ireland champions inevitably brings greater scrutiny than any other county.

“That is just the nature of the beast. And you want all your games on TV. If they want to retrospectively go back and discipline someone then that’s fair enough too. . .”

O’Donoghue no longer has any complaints about the shoulder injury which kept him sidelined for seven months. Luckily for him, the replay against Cork has also brought him even closer to his 2014 form.

“A lot is spoken about the competition in training, and all that, but you can’t replicate tight games like that. And if you come through then, the bond in the group just steps up massively. And those two games will have done me the world of good.”