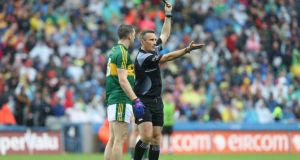 Kerry’s Marc Ó Sé is shown a black card by referee Maurice Deegan who had a good match in filthy conditions in the semi-final at Croke Park. Photogrraph: Andrew Paton/Inpho

August has so far been a wicked month for the administration of discipline in the GAA. The evidence of recent years has been that the games have become more law abiding and the rules better observed but there’s still always the sense that like some Wild West frontier town, Gaelic games are always just a couple of gunshots from anarchy.

Rules have to be formulated, passed and enforced and there have been flaws exposed in this process but the biggest issue for the GAA remains the old one – a culture of tolerance for misbehaviour and disrespect towards those charged with enforcing rules.

Only at the weekend after a terrific and absorbing All-Ireland semi-final, referee Maurice Deegan from Laois was accused by Joe Brolly on The Sunday Game of doing “something to Tyrone today which normally happens between consenting adults”.

Deegan had been involved in some close calls, two of which looked questionable: the black-carding of Tyrone’s Ronan McNamee for what looked like a yellow-card foul and the reverse treatment of Kerry corner back Shane Enright, who – for the second All-Ireland semi-final in succession – miraculously avoided a black card.

Tyrone’s Ronan McNabb should have been sent off rather than yellow-carded for the challenge on Colm Cooper but in fairness to the referee very few spotted the severity of that in real time.

Referees’ nerves must be shot at this stage. Last weekend Deegan had a good match and maintained order in filthy conditions. He was decisive and in control. His – and every referee’s – reward is to have to hold his breath while match recordings are pored over like the Zapruder footage to see if decisions they had to make in an instant stand up to forensic scrutiny.

It’s one thing for pundits to lead the charge but another for the GAA to hang its match officials out to dry, as happened on an extraordinary evening last week in Croke Park.

The case of Tiernan McCann attracted most attention and we’ll get to that but his expected acquittal was one of three – out of a total of four; a success rate for the defence last seen when Perry Mason was on TV.

It was an irony of the Central Hearings Committee meeting that whereas the now more rigorous legal review of disciplinary process all but guaranteed that McCann would be cleared, its fleeting absence – when two of the most experienced members of the CHC, solicitor Liam Keane who is the chair and DRA panellist Declan Hallissey recused themselves for conflicts of interest – caused the fiasco of Mayo’s Kevin Keane being cleared.

Allowing someone who has clearly struck an opponent to go unpunished is never a good idea but at the heart of this decision was a far more serious consideration.

It’s not that it’s a much- feared precedent, as I wouldn’t recommend being the next advocate up before Liam Keane trying to get the CHC to turn red cards into yellow on the basis of last week’s decision, but it’s further evidence of how disrespected referees are within Gaelic games.

But last week we had a situation where two decisions taken by referees were overturned – Keane’s red card and the black card shown to Tyrone’s Conor Meyler – despite there being ample evidence that both decisions were reasonably arrived at.

The decision reached was that “the infraction as alleged was not proven”. So now, a referee’s report is an allegation to be tried by the CHC?

What happened to the previous standard generally applied? To use a finding from a random previous hearing: “that the video evidence provided was not sufficiently compelling to contradict the referee’s report and directed that the fixed penalty apply”.

On one level it’s easy to sympathise with the CCCC in their decision to go after Tiernan McCann given the ridicule and, yes, discredit his actions brought down on the GAA but unfortunately the world of discipline within Gaelic games is not terribly nuanced. You either get off or you get suspended. Were attitudes a bit different it might make sense to take a moot case in order to express displeasure with what is seen as grossly unsportsmanlike behaviour.

The problem was that since the GAA has made its structures more procedurally correct the prospect of substituting the catch-all 7.2 (e) rule on discrediting the association for something as specific as the yellow-card infraction, Playing Rule 5.4: ‘To attempt to achieve an advantage by feigning a foul or injury’ (Official Guide II), was remote.

When even cast-iron cases from the CCCC are getting knocked back, why take further chances? As it stands there’s now serious incentive to treat the GAA disciplinary process like a broken slot machine.

There’s always a chance it’s going to pay out. Unless of course you’re a referee.