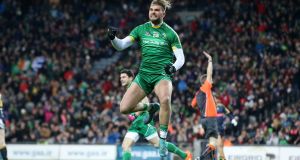 This Australia team was hyped up as the best yet – although Ireland’s 56-52 win on Saturday in Croke Park turned out to be pretty comfortable – bar the final five minutes.

A late Eddie Betts goal allowed Australia some glimmer of hope, but in truth this was a case of vice-versa from 12 months previous as a complacent Ireland survived a late burst from the visitors, having absolutely dominated the first half.

Ireland only managed 13 points in the entire second half, and outside of some trademark defending from Philly McMahon and breathtaking fielding from Clare midfielder Gary Brennan, they had simply fallen asleep.

Yet as Mitchell’s late bundled-in goal was followed up by a Robbie Gray over, only one over separated the two teams, and so Ireland would need to come again. And that they did, by now the crowd had even realised that this game was once more on the line.

From here on though Ireland dominated possession and Bernard Brogan crucially put four in it with a late behind. That would prove the last score of the game.

Ireland led at half time 43-23, after a dominant first two quarters. Joe Kernan’s team had stand-out players all over the field but none more so than Aidan O’Shea. The man who lit up the summer’s championship with Mayo scored two goals and gave the visitors an exhibition of high fielding.

Ireland’s first goal came early in the first quarter, after Conor McManus’s crossfield pass to Brogan was cut out by Australia’s veteran goalkeeper Dustin Fletcher, but only as far as O’Shea who rattled into the empty net.

Ireland were showing excellently in the aerial battle, Brennan caught two excellent restarts in the first quarter, as up top McManus and Brogan were causing havoc as the Australian defenders persisted in playing them from in front – but the quality of Ireland’s kickpassing was finding the deadly duo inside time after time, and they were clinical.

Australia struggled, particularly with their kickpassing, and they were quite unusually matched in the physical stakes by Ireland. The likes of Michael Quinn, the man who had become the fastest GAA player to make the transition to AFL during a previous stint with Essendon in 2009, was matching the Australians yard for yard around the pitch, displaying huge industry and ferocity.

Nonetheless Ireland had Niall Morgan to thank as they led after the first quarter by eight points, rather than three. The Tyrone stopper saved from Jake Stringer at point-blank range, deflecting his attempt out for a behind, after Nick Reiwoldt tackled Rory O’Carroll coming out with the ball.

Despite Australia appearing fired up for the start of the second, O’Shea would bury a second goal three minutes in. Again he reacted quickest to Brogan’s saved effort, and this time from further out he drilled his effort low into the net.

Betts showed well as Australia attempted to come back into the game but they would miss three clear chances for an over, while down the other end Brogan was by that stage slotting over his fourth of the game.

He was again a key man in the third goal, combining with McManus and Patrick McBrearty as they handpassed the ball around a hapless Fletcher allowing McBrearty to palm into the net via a hefty collision with the post. The referee, though, had given Ireland a penalty already, with McManus having the privilege of delivering Ireland’s third six-pointer despite the Donegal attacker’s braveness.

The third quarter was much more subdued. Australia came out with two overs in a row, Leigh Montagna and David Mundy respectively, only for Ireland to respond with two in a row themselves. The first was from McManus after a fantastic move involving Darren Hughes and Donnchadh Walsh. Kerry’s sole representative laid the ball off to his Monaghan team-mate with a classy overhead flick, before Hughes found McManus inside for a close range mark.

The second was all about Hughes, he latched onto a wayward crossfield pass from McCaffrey, fielding and pointing from distance. A point which would typify Ireland’s performance – excellence in catching and kicking.

By now Australia’s goalkeeper Fletcher was acting as a sweeper, picking up the deep lying Brogan, and while he cut out a number of attacks it was a case of too little too late.

Reiwoldt, a five-time All-Australian, would keep Australia in touch with two late overs but they trailed ahead of the final quarter 39-50.

Ireland then had chances in that fourth quarter to kill off any chance of a revival, but first Diarmuid Connolly and then Brogan opted to go for goal themselves, when better options were available to them.

They were very nearly punished when Mitchell scored Australia’s only goal to put four in it. Yet Ireland survived, and in doing so edge the overall head to head between the two countries 10-9.