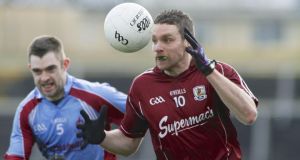 David O’Connell of Galway gets away from and Alan Wynne of GMIT during yesterday’s Connacht FBD Football League round three clash at Tuam Stadium, Co Galway. Photograph: Inpho

Roscommon manager John Evans described his side as a “work in progress” as his side kicked five points in succession to shock Mayo in Ballinlough.

While last year’s defeated All-Ireland finalists struggled with their fitness late on in the heavy conditions, the home side finished like an express train to set up a FBD League final date against Leitrim on Sunday next.

“It’s a work in progress. We’re not the finished article but we have a few fellas to come back into the team. But it was great to see us move the ball with a bit of fluency. There was a lot of good tackling by our lads. There wasn’t much space out there,” he felt.

The winners found themselves 0-6 to 0-3 behind at the break. Mayo’s Andy Moran was the primary influence on the game in the opening half, kicking two points. Jason Doherty, a late replacement for Darren Coen, also added a brace alongside frees from Kevin McLoughlin and Alan Freeman.

Roscommon enjoyed loads of possession but some poor passing and players taking the wrong option frustrated a large home support.

But they were right back in it when the impressive Ciarán Murtagh goaled in the 37th minute. A minute later the same player kicked the equaliser.

Mayo regained the initiative when Adam Gallagher’s shot was brilliantly saved by Roscommon goalkeeper Darren O’Malley. The ball was saved on the line by Ronan Stack but the young defender let possession slip from his grasp and the goal was awarded.

“It was a disappointing performance from us. Our decision making in the second half was poor. We just kept kicking it away and doing crazy stuff with the ball. Our fitness came a little bit into it at the end as well when Roscommon started running through us. They have a lot of good work done obviously but we’ve a lot of stuff to look at to great ready for two weeks’ time against Kildare.

“We know that we’re behind where we should be in terms of our ball skills and training. Roscommon finished strongly but the amount of possession we gave away today was horrendous,” he felt.

As Mayo wilted, Roscommon grew in stature and points from the excellent Cathal Shine (2), substitute Mark Nally, and the Murtagh brothers, Ciarán and Diarmuid, sealed a famous win.

“You can see that the team are beginning to work for each other. There was a lot of friendliness out there. We had a meeting beforehand and the team are bonding from last year,” noted Evans.

Leitrim are still on track to retain their FBD title following an impressive second half fight back against an excellent Sligo in a pulsating game played at high tempo before 1500 spectators at Ballinamore yesterday.

The visitors served notice of their intentions from early on with an Adrian Marren pointed free and a Charlie Harrison point from play after four minutes. Leitrim struggled to keep pace with the fast moving well organised Sligo side who led by 5 pts to Emlyn Mulligan’s opening pointed free for Leitrim in the sixth minute. The home side came more into the game with three unanswered points between the 18th and 21st minute to reduce the arrears but a goal by Niall Murphy in the 22nd minute followed by a Damien O’Boyle point from play one minute later restored the Sligo dominance.

Three Emlyn Mulligan points kept Leitrim in touch but disaster struck in extra time when Adrian Marren converted a penalty and the visitors deservedly led 2-7 to 0-7 at the interval.

In a remarkable turnaround Leitrim took the initiative immediately on the resumption with three unanswered points by substitute Darren Sweeney and two by Mulligan as Sligo struggled to find their rhythm. In the 47th minute Tomás Beirne fisted a high dropping ball by Mulligan to the Sligo net levelling matters for the first time. Then with four minutes remaining as excitement reached fever pitch, a Ray Cox point from play put Leitrim ahead for the first time.

Once again Sligo responded with a Cathal Burns point from play in the 58th minute but Leitrim held out for a deserved draw and a place in the FBD Final against Roscommon at Carrick-on-Shannon on Sunday next.

Mark Hehir’s late black card meant Galway finished with 14 men after they had used all six subs at Tuam Stadium, but manager Alan Mulholland has predicted problems with the system once the national league starts.

With a minute to go Hehir joined James Kavanagh and Sean Denvir as Galway’s black card culprits, but Mulholland admitted players have become confused with the refereeing of the game.

“So far we haven’t really seen much because not a whole lot has been on the line. But I think it will be a big, big story in a couple of week’s time when the national league starts.

“To be honest, the players are a little confused as to what they are getting black cards for and what they are not. When the national league starts and you lose guys who are decisions makers and you are not too sure why, then it’s going to cause trouble. The just is still out as far as I’m concerned,” said Mulholland.

Galway led 0-7 to 0-3 at half-time with Sean Armstrong and Shane Walsh impressing, and after Ronan Steede was black carded for GMIT for the second week, Galway kicked on to the win.

IT Sligo earned an eight-point win over NUI Galway at the Connacht Centre of Excellence at Bekan yesterday, with Stephen Coen and Evan Regan in scoring form to ensure the Sligo college remained unbeaten.

Coen and Regan shot 0-5 between them in a dull opening half, in which NUI Galway found it hard to come to terms with IT Sligo’s attackers. David McCormack was the Galway college’s best performer, and shot two first half frees, while Cristoir Davey scored NUI Galway’s solitary point from play in the opening half in the 27th minute, to leave a four point gap between the sides at the interval.

Although Niall Walsh was black carded in the second half IT Sligo remained in control, despite an improved second half display from NUI Galway, in which David McCormack again excelled.

Stephen Coen’s 51st minute goal put an end to any hope of a close finish - the Sligo footballer also kicked two second half points to complete a well-rounded personal display - and while NUI Galway endeavoured to reduce the gap in the closing stages - Davey and Johnny Kelly raised white flags - IT Sligo closed the game out with consummate ease to finish the FBD league unbeaten, as both sides now look ahead to the Sigerson Cup.