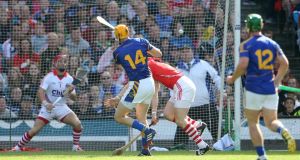 So much for the revolution. So much for brave new dawns and hurling’s new wave and a sport turned on its head. So much for the old ways being gone and the old certainties looking shook. Three weeks from now, Tipperary will meet Kilkenny in the All Ireland hurling final for the fourth time in six years. If the dinosaurs are dead, the funeral is looking like quite the shindig.

On a day when the 68,728 who came to Croke Park constituted the biggest crowd ever to watch the two counties face off, it was a pity only one team turned up. Tipp left Cork sizzled and charred and sent them home with the cinders of a 2-18 to 1-11 scoreline to blacken them.

By any measure, this was a gorging for the ages. The 10-point margin at the end was Tipp’s biggest win over Cork in the championship since 1965; the 1-11 Cork put up was their paltriest deposit on a scoreboard against Tipp since 1973. Patrick Horgan failed to score from play for the first time in four years and only one Cork forward managed more than a point outside of placed balls. Conor Lehane was the lone voice of resistance but even his four points barely registered.

All the same, arithmetic doesn’t really do the day justice. Cork’s shooting was consistently awry – they ended the day with 16 wides as against Tipp’s 11 – but that tally was far more a symptom of their woes than the cause. The relentless drip-drip of unforced errors, of balls dropped or not picked, of passes misplaced and spare men unseen – it all added up to a picture of a side ill at ease.

Jimmy Barry-Murphy’s team is young but you wouldn’t say they’re inexperienced. Ten of his starting 15 here played in last year’s All Ireland finals. Another two came off the bench. Whatever this was, it’s hard to argue that it was stage fright. And JBM wasn’t minded to reach for that excuse either.

“No, I don’t think there’s any question of that,” he said afterwards. “I wouldn’t want to use it as an excuse either. We were in a final last year, we’ve played here before and we did ourselves proud last year against Dublin and Clare so I don’t think it was.

This is true. This has always been true. Only Tipperary could make an All Ireland final winning matches by an average of over 12 points a game and still have trouble convincing the general populace of their bona fides. Yet for all the sceptical pondering over what justice they will do to their potential, the simple truth is Tipperary have access to a gear that the majority of sides can’t locate.

Seamie Callanan whipped 2-4 here, a goal in each half speared home with equally violent accuracy off his left and right side. Bubbles O’Dwyer scudded six points from play, their midfielders Shane McGrath and James Woodlock trooped off to standing ovations near the end with three points each against their name.

That said, this was a classic example of a defence winning a game and an attack deciding by how much. Pádraic Maher and Brendan Maher lorded matters in the half-back line and denied Cork any sort of purchase in the first half. Cathal Barrett and Paddy Stapleton were pinballs cannoning off Cork’s inside forwards and Darren Gleeson picked the right day to make his first decent stride out of Brendan Cummins’s shadow.

It was gritty at times, physical always. Less of the whizz-bang, more of the biff-bang. In its own way, the sort of thing Eamon O’Shea was looking for – albeit that he tried to poor mouth it just a little afterwards.

“I was very proud of the way they approached the game. They decided what was going to happen on the pitch and they decided today that they weren’t going to let this opportunity pass them by. They’re not happy in there and I’m not happy.

“And they know I’m not happy. Primarily, they’re not happy. The fluidity that we got, the breaking ball, we probably didn’t pick up enough of those. It’s very hard because Cork had a sweeper all through the game and it’s very hard to play against that. So I think they deserve great credit but they’re still not happy.”

They’re in the final though so presumably they’ll get over it.

Tipp v Kilkenny on September 7th then, one final game to settle it all.

Novelty is so last year.