Tipperary should edge it over Waterford

Underage success should be good enough fillip for Tipp 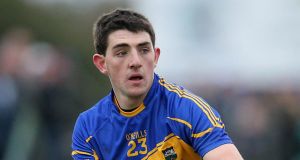 Colin O’Riordan is one of the many talented young players brought through by Tipperary. Photograph: Cathatal Noonan/Inpho.

The counties have been relatively rare protagonists and you have to go back 27 years to find Waterford’s last victory.

Tipperary have been making their way in the football world this decade and the recent narrow defeat in the All-Ireland under-21 final re-emphasised that. They’ve also been playing away in a higher division of the league and have some high-quality players from recent successful underage teams, including the exceptional Colin O’Riordan, Steven O’Brien and Michael Quinlivan.

Waterford have been competitive in recent seasons, without revisiting the high point of a few years ago which brought promotion and their last championship win, and won the McGrath Cup at the beginning of the season. This year’s league was however poor in terms of outcomes.

Manager Tom McGlinchey is able to call on Liam Lawlor, formerly full back with the hurlers, who lines out at centre back.

George Ford and England wary of possible Welsh backlash 06:00
Ian O’Riordan: Debate on return of competitive running starts fast and stays hot 06:00
Ireland out to put things right against Georgia side trying to make a point 06:00
It’s good to have Richie Hogan back, he was missed 06:00
David Humphreys: Georgia simply can't be dropped in at the deep end 06:00
Crossword Get access to over 6,000 interactive crosswords