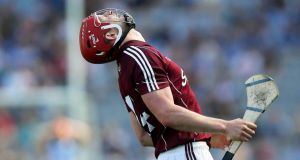 Hunter S. Thompson always said there is no such thing as objective journalism. The phrase itself is a pompous contradiction in terms. And with the possible exception of things like match statistics, substitutions and the final score, the sporting pages have little space for any pretence of objectivity.

So when Liam O’Neill stood up in Croke Park earlier this week and calmly declared this hurling championship “the best ever” – an entirely subjective statement if there ever was one – he was greeted with eager nods of approval, especially from us journalists.

Nearly everything about this hurling championship so far invites this sort of sweeping statement. There were, however, two silent objections, from two men sitting nearer the front – Galway goalkeeper James Skehill, and his Tipperary counterpart Brendan Cummins.

Skehill was staring at the floor, and Cummins was staring off into space, and for good reason. Galway’s championship to date has been bitterly disappointing but they could begin some major redemptive work against Clare in Thurles tomorrow. For Tipperary the worst is already over because their championship is over already.

Both men were in Croke Park to promote next month’s Poc Fada competition, but that sideshow will be a small consolation for Skehill should Galway fail in their primary goal – no matter how great the rest of the season turns out to be for everyone else. No team is ever consoled by the success of their rivals.

Defeat to Clare tomorrow – and Galway by the way have lost their last five quarter-finals – wouldn’t just undo all the progress of last year but also further extend their trend of following one good season with a distinctly poor one since they last won the All-Ireland in 1988.

The irony is that year Galway put All-Irelands back-to-back, and yet they have consistently failed to put together two good seasons ever since. In the 25 years since Galway last won that title, 12 defending All-Ireland champions made it back into the final the following year, as have six of the beaten finalists – and yet Galway have failed four times out of four (see panel).

Now, unless they quickly rediscover their form of last summer – which included the stunning Leinster final victory over Kilkenny, and subsequent battling All-Ireland final replay defeat to the same opposition – Galway won’t even make an interesting footnote to this hurling championship. The danger is very clear and very present.

Skehill agrees that Galway haven’t yet t “clicked” in 2013 but he remains positive.

“We obviously didn’t win the Leinster final so we haven’t achieved that goal, but I wouldn’t say we’ve gone back too far, or slumped badly from last year, as some people are saying.

“We’re still quality hurlers. We’re a quality side with a quality management and a quality backroom team. It’s just about getting everything right on the day. We’ve just got to click, really. So this Sunday now, while I won’t say it’s redemption, it’s a game that needs to be won for us to progress. Our main aim is to win the All-Ireland and to do so we have three games to win. And this is step one.”

Skehill agreed that Dublin appeared much sharper in the Leinster final, partly explained by their intense run-up of games which included replays against both Wexford and Kilkenny. Manager Anthony Cunningham admitted as much in the immediate aftermath, saying Galway “took a good while to get going” – which, given the nature of their 12-point defeat, is putting it mildly.

Cunningham has since closed off all Galway’s training sessions, after the Leinster final defeat, not just to avoid the distraction of spectators.

He knows he had to shake up his team and said as much during the week.

“There won’t be any knee jerk reactions from the Dublin defeat, but guys have to prove themselves all over again in training. Whoever has performed well in training in the last two weeks will be picked, it’s as simple as that.”

Too loyal
One of the explanations for Galway’s inability to put two good seasons back-to-back in the past is the notion managers were too loyal to the players who produced the goods first time out. Cunningham is keen to avoid any repeat of that.

Another explanation is that Galway somehow find it harder to identify their 15 best players, year after year, and there are elements of that again.

Niall Donoghue’s return from injury certainly adds an extra option in defence, and given the fact Galway finished up against Dublin far better than they started, Andy Smith, Damien Hayes, Aidan Harte and Jonathan Glynn – who all played well off the bench – look better -placed for this one.

“It’s obvious we didn’t do ourselves justice in the Leinster final,” said Skehill. “We set out a target and we didn’t get it. But Dublin were by far the superior team. You can’t take anything from them. I’m not saying the lack of our performance was contributing to their success. They beat us fair and square.

“But match practice counts for everything. It’s worth 10 training sessions to you. When you come through a tight match it gives you an extra boost, both mentally and physically. You know you can mix it, you know you’ve come through a good battle, it’s in the tank.

“When you come off a lot of training sessions you’re kind of stuck in purgatory a small bit, in that you don’t know how you’re going to get on until the first 10 minutes is gone.

“Now more than ever, hurling is a level playing field. Whereas in previous times you had Kilkenny and Tipperary as the top two, you may have had a third and a fourth and then everyone else was below, but now you’ve got a top five and a top six and on any given day they can beat each other.

“But since the Leinster final we’ve gone about our business, we’ve trained as hard as physically we can, and I think that’ll stand us in good stead on Sunday. There’s no panic setting in either. If you do panic you may as well forget about it.”