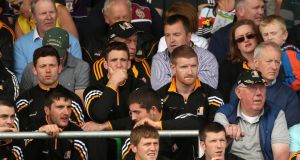 In waiting: in the three games Kilkenny have needed to make it to the final, Cody has used just eight substitutes. Photograph: INPHO/James Crombie

As the drip-drip news of Kilkenny retirements came over the winter, the caveat went that only JJ Delaney would be departing the scene as a starter.

Henry Shefflin, David Herity, Brian Hogan, Tommy Walsh and Aidan Fogarty had all had their days but hadn’t Kilkenny just won an All-Ireland without any of them making the teamsheet for the last game of the year? This was how the county talked itself into the retirements not being that big a deal. When the flood comes, you grab any piece of floating debris and call it a lifeboat.

Harvest time and they’re back in another All-Ireland final. If that doesn’t say much for the strength of the championship, it’s still one of the signal achievements of Brian Cody’s reign.

You can argue that another county might plausibly survive that weight of experience walking out the door. You’d struggle, though, to come up with another manager you’d trust to create the conditions for it. Cody is the drummer with a spare stick in his back pocket at all times.

But there comes a time – even in Kilkenny – when you run out of timber. If the first 15 was always going to be presentable this summer, what came off the bench was equally going to be a step into the unknown.

Bottom of the well

When Cody only brought in one substitution in the All-Ireland semi-final against Waterford, it looked like him admitting that the bucket had hit the bottom of the well. He wouldn’t have a bar of it, naturally. “I just felt they were doing very, very well,” he said afterwards. “I thought that everybody knew the role they had to play and everyone was doing it well. If back-up had been needed, we were ready to go in that situation but we had a bit of a cushion in the last 20 minutes and there was nobody creating a situation that was going to be damaging to us.

“We got John [Power] in for the last seven or eight minutes. Sometimes another player goes in and before they’re settled, the pace of the game is at such a height, it’s not the simplest thing to do. But the players just dug in and carried on.”

In the three games Kilkenny have needed to make it to the final, Cody has used just eight substitutes. He hasn’t once used all five subs available to him, and only 21 players have seen game-time in black and amber this summer.

By comparison, Anthony Cunningham has used 29 subs in six games and given game-time to 25 players. In five of the six games he has used all five replacements available to him.

Before we jump in with both feet and draw drastic conclusions, it should be pointed out Cody has form in this regard. In 2003 he made an All-Ireland final using a total of three subs. Not three per game, three altogether.

In 2009 he only made eight substitutions on his way to the final and that was a year in which his bench was variously filled with names like Michael Fennelly, Richie Hogan, TJ Reid, Cha Fitzpatrick, Noel Hickey, Derek Lyng and James Ryall.

Just because Cody reckons he can live without you for a particular 70 minutes doesn’t mean you aren’t – or won’t eventually be – worthy.

In terms of known quantities, however, this is undeniably the thinnest-looking bench Cody has brought to an All-Ireland final in quite a while. Beyond Richie Power, there are no acknowledged game-changers – and if he was in the full of his health he would surely be starting rather than being sprung from the pine. Same goes for Jackie Tyrrell in defence.

In last year’s final and replay, Cody was able to send in Shefflin (twice), Pádraig Walsh, Aidan Fogarty, Joey Holden, John Power and Lester Ryan. Walsh and Holden are in the team now, Shefflin and Fogarty are gone, Ryan hasn’t played a minute this summer and Power’s only involvement came late on in the semi-final against Waterford.

“The main thing is that Brian doesn’t do sentiment,” says Brian Hogan, who ended life in a Kilkenny jersey sitting on Cody’s bench. “The only time I can remember him doing it was 2008 [with James McGarry] and that was a special circumstance. Apart from that, it’s business. There might be a scenario where the team is six of seven points up and other managers might give a lad a run – that doesn’t enter the equation. It’s about results and it’s the job of the guys on the field to get the result. Nothing else comes into it.

“The way the league went, there were a few injuries and they were trying to get guys back and they probably didn’t have the opportunity to look at too many guys in the league. Then when it came to championship, you’re looking at the panel and you’re just not 100 per cent sure of what level they’re at. It’s a big thing to ask of a guy to throw him in at championship level if you haven’t seen enough of him.

“I think that’s the case this year, especially in the backs. If you look at the bench, there’s a lot of young guys coming through from the under-21s and it’s a big ask to throw them in. Shane Prendergast came in for Jackie but Shane has been there for a few years and he’s not a young lad either. Barring injury, it’s unlikely that the backs are going to change during the match on Sunday.”

We know that Codyism lives and dies by competition within the panel. In no other county could the subs in last year’s drawn All-Ireland final have gone home on the bus knowing they were in with a serious shout of making the team for the replay. Greatest game of all time? Pah.

Cody made three changes – John Power scored 1-1, Pádraig Walsh and Kieran Joyce (along with Cillian Buckley) turned the Kilkenny half-back line into a DMZ. Joyce was man of the match, despite not having had a sniff of action since June. Not for Cody the idea of keeping a player going on a diet of garbage time runs in games that are long dead.

“Earning the right is something that is a strong underpinning of what he believes in,” says Hogan. “He’s not into giving guys runs for the sake of it. Even if he brings on a guy with 10 minutes to go, there’s a method behind it. He’s either thinking that this guy can offer something later on in the year or he’s sending a message to the guy he’s taking off.

“You’re asking guys who are number 25 or 26 in the panel to put in the same level of commitment as the starters. But if guys don’t believe deep down that they’ve got a rashers of a chance of playing, they’re not going in totally motivated. To him, a few minutes at the end of a game might be lip service. The real target is to get on the team and he’s always made it clear that the weeks leading into the game are key to that. He practices what he preaches and we’ve seen that for long enough.”

Evidently, there hasn’t been an irresistible push from the fringes of the panel this time around. It could well be that the true cost of all those retirements will only be known come teatime tomorrow.