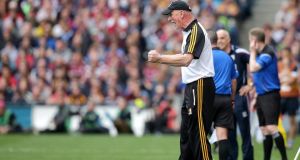 Kilkenny manager Brian Cody on his future: “I was able to obviously marry both all along, and it won’t have any influence on what I decide to do or not to do.” Photograph: Morgan Treacy/Inpho

Typical of Brian Cody to keep staring straight ahead even when looking back, because when reflecting on All-Ireland hurling title number 11, the Kilkenny manager still sees room for improvement.

The championship structure, Cody says, even if it appears to serve Kilkenny so well, doesn’t necessarily serve hurling very well. Indeed, Kilkenny played just four championship games over 19 weeks this summer, culminating in Sunday’s triumph over Galway, hardly the most practical, if not sustainable.

“I don’t think about how it could be done,” says Cody. “What I do know, and I explained at the time about what Richie Hogan said, is that he loves the championship and he’d love to play more of it. He is not a fan of the way it is structured. And I would like to see change definitely too, there’s no doubt about that. I’ve said it before.

“To me, central to the whole thing has to be the club situation. Club players would love to get more club hurling in the summer. It’s not enough just to leave things as it is. The time to change in everything you do is when you are going really well and things are good and strong.

“The whole club thing, everyone is crying out for it. If you dilute the genuineness or absolute importance of the club scene, and people pontificate about it and they talk about it, but the All-Ireland championship has to be condensed into a shorter period of time in some way. I am not the guy to give the suggestions. I can only give my opinion.

Cody at least agrees with the suggestion that the All-Ireland finals could be played in early August, as that would clear September for club fixtures.

Even in reflecting on Sunday’s win – his 11th All-Ireland in 17 years – it seems Cody never looked back, even when losing so many of his most decorated players at the end of 2014: his meaning of the word “transition” is clearly different to most others.

“Well transition means change. Moving on from something you did before. We were, that’s reality. But we’re all in transition, really. If you’re not then you’re standing still. So transition is part and parcel of life, of sport and of team sport in particular.

“You think of Richie Power. He played 10 minutes of hurling this year, and that’s how good he is. Michael Fennelly, how he comes up with performances like that, in a semi-final and final, beggars everything that is supposed to be part and parcel of what we’re doing. And Jackie Tyrrell. Then Richie Hogan. How he played the semi-final we’re still wondering, and how he got onto the field is nuts as well. And Eoin Larkin, a cracked thumb, in a cast until last Tuesday. And these lads just said, ‘We’d be grand, we’ll be there’, and that’s what they did.

“And if we hadn’t have won yesterday, this wouldn’t be an excuse either. All it was is an indication of their resilience.”

As for his future as Kilkenny manager, now that he’s retired from teaching, Cody wasn’t looking that far ahead: “Whether I was still principal in the school or not wouldn’t change how I feel about it. I was able to obviously marry both all along, and it won’t have any influence on what I decide to do or not to do, whatever it is.”