Nicky English: Kilkenny have weaknesses but they also have Reid and Hogan 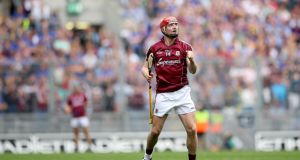 Galway’s Joe Canning: Galway really need him to be man of the match but only in a functioning attack. Photograph: INPHO/James Crombie

There are three things that have struck me about Galway. I bumped into Anthony Cunningham the Wednesday after the Leinster final and was taken aback by how upbeat he was. I’d heard his comments after the match but had assumed they were for public consumption, but in person he was just as confident.

Secondly, I was looking at their team list before the Tipperary semi-final and it hit me how much it had strengthened since the Leinster final.

Thirdly, the injury-time finish to that semi-final really impressed me. They were seriously going for that result, flat out.

Those last few minutes of that game reminded me of them in their heyday when I played against them: the power in their game and the fire they played with, the belief.

At the end even the full-back line attacked the ball and looked completely oblivious to what had been an awful afternoon for them. I have no doubt about the consistency of their 2015 form and expect a big performance.

With that attitude you’d have to give them every chance going into this All-Ireland, but as so often in the past the logic and the hurling point to Kilkenny having too much in hand for them. It’s the easy choice but there are good reasons for that.

It’s only nine weeks since they beat Galway.

Galway really need Joe Canning to be man of the match but only in a functioning attack with Cathal Mannion, Conor Whelan, Jason Flynn and David Burke all playing a scoring role – and maybe Conor Cooney, who is close to a return.

It’s no use expecting a Joe Show to win this. He’s actually quite close to his best apart from the wides for which a cross-wind in Thurles in the quarter-final was partly to blame and he looked anxious against Tipp probably as a result.

For the past two years nearly every Kilkenny preview comes back to Richie Hogan and TJ Reid. I see where Cunningham said he felt they had “got on okay” against Kilkenny’s top players in the Leinster final but they didn’t really.

Hogan and Reid did all of the damage.

They have to be held, but it’s easier said than done. Very few players in Ireland would be capable of it.

Daithí Burke picked up Hogan at the start of the Leinster final and did fairly well, but as the game wore or and play became more fractured, Hogan made a real difference by drifting back from centre forward into midfield and his own defence and picking up dirty ball. Burke didn’t follow but if Galway are using a man-marker on Sunday, whoever it is will have to follow this time.

Burke may well be the choice to do that; he has been good all year: he’s athletic but also a really good hurler with a good head on him.

What do Galway do about TJ?

I’d have said Pádraic Mannion up until the semi-final but he proved really vulnerable in the air on Séamus Callanan. If John Hanbury is back to full fitness he might just be the preferred option.

The reality is though that if Galway repeat the performance of the full backs against Tipp and TJ Reid scores three goals it’s over. Even if he’s tightly marked there’s potential support from Hogan, Colin Fennelly, Ger Aylward and possibly Richie Power, who may be ready for Sunday.

There are vulnerabilities in Kilkenny. Their full-back line is inexperienced on this stage. Joey Holden has had a lot of attention focused on him, replacing JJ Delaney, but he made one worrying mistake for Jason Flynn’s goal at the start of the second half of the Leinster final when he challenged behind Jackie Tyrrell for the same high ball.

It wasn’t an error a full back should make but it was the only questionable thing I’ve seen him do and he’s marked some quality full forwards. It was all the same a give-away goal from a full back’s perspective.

More worrying for Kilkenny is Eoin Larkin’s thumb injury, which puts further pressure on diminishing resources. In the Leinster final, when he struggled at times with the pace of the game, he popped up at the finish and converted everything he needed to convert. But his hands are now his ultimate weapon and for a thumb to be fractured or in any way affected really reduces that power.

Aside from their full-back line frailties the big issue for Galway, another issue I think will be in the half forwards. They have to make an impact here but ultimately they weren’t able to in the Leinster final. Kieran Joyce is comfortable sitting in in front of Joey Holden with Conor Fogarty dropping back and Cillian Buckley outstanding. Pádraig Walsh also worked out Jonathan Glynn in the Leinster final and Kilkenny were well on top.

The biggest worry I have about Galway is the failure to convert enough of their chances. They had them in the Leinster final at key stages but Cyril Donnellan shot wides, as did David Burke with a goal chance. Although they’ve improved a good deal it’s still been happening.

It may have been to Kilkenny’s credit Galway were prevented from getting clear shots at goals but it was through their own inaccuracies that Cork were so close to them so late in the quarter-final before they pulled away. And when they had chances to start putting Tipp away in the semi-final they shot wides.

With Reid and Hogan in the sort of form they are though, Kilkenny will ultimately convert the bulk of what they create, including goals.

1 New PGA Tour schedule could bring an end to the year like no other
2 Man City to investigate Kyle Walker over lockdown sex party
3 Club World Cup to be proposed as alternative to Champions Cup
4 My favourite sporting moment: Donegal and Kildare’s high summer street opera
5 Cheltenham controversy will pass for magnificent triviality of horse racing
Real news has value SUBSCRIBE