Nicky English: Clare and Waterford will have big say in battle for Liam 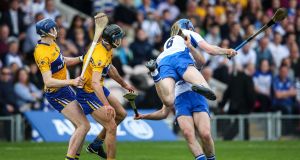 The result and performance of both teams shows just how evenly matched they are.

They could play a few times and get different results, although there’d never be much in it.

It was also brilliant to watch with a fantastic ebb and flow and I’m trying to remember a better league final.

It’s hard to argue that Clare were much better on the day, if they were better at all. However, winning the match and the title in those circumstances is a really big achievement.

Last week there were a lot of complaints about the amount of traffic around the middle of the field with players like Podge Collins and Jake Dillon dropping back, and while that didn’t change yesterday in Semple Stadium the first touch of players was much better and the striking more accurate.

The ball was moving more quickly than last week and in the good weather these were summer conditions. Indeed, it’s hard to say that the championship match in four weeks will be much different.

There was a feeling after last week and the drama of extra time that the replay could become an epic contest – and it did.

The quick goal by Patrick Curran kickstarted what turned out to be a brilliant match – although Clare might have had issues with the number of steps he took.

There was nothing I could see being consciously held back even in the context of the coming championship encounter, although both sides have players to bring back.

The pitch of the game really improved and the performance of Tony Kelly showed the benefits of getting the full match under his belt last week.

When he gets the ball on the left-hand side, his scoring is nothing short of phenomenal.

It was fitting that he turned out to be the match-winner on a day when Clare demonstrated that they have rediscovered the energy and desire of 2013, which after the All-Ireland and under-21 success that followed a week later seemed to evaporate. They are now real contenders again.

There were good displays all around: the fetching of Waterford’s Tadhg de Búrca was exceptional, even if his distribution wasn’t as good at times.

In the last period it looked as if Waterford had put Clare away. Austin Gleeson became dominant after a superb battle with David Fitzgerald, which he ultimately won.

Pat O’Connor for Clare also did well, apart from a poor error for the second Waterford goal, and Cian Dillon had a very good pair of finals, driving the team forward from the back.

Waterford could argue that the free they should have got for the foul on Jamie Barron was far more obvious than the one awarded to Tony Kelly seconds later but Clare showed the value of digging in when Waterford looked to be the team with the upper hand.

I’m sure Waterford are sore about what happened with those frees but in the long run does it make any major difference?

In fact, Derek McGrath may find that he has the easier team to send out of the dressing-room the next day.

Anyway, grievances need to be carefully managed and I think Waterford will have no problem in parking them as they prepare for the Munster championship semi-final in four weeks.

I am more convinced than ever that these two will be in it for the long haul and I expect both will be involved in the championship right until the end – and it may not even particularly matter who wins the Munster semi-final.

Waterford need to get Maurice Shanahan back in the starting line-up but Clare have a greater number of serious players to bring back into the team.

John Conlon won’t be ready for the championship match but David McInerney may well be. The same goes for Conor Ryan. Colin Ryan did well coming on in this match, so he’s another option.

Clare have had the upper hand over Waterford in a number of contests in recent years and losing narrowly at the very end in a match they should have won is uncomfortable for them.

However, I don’t subscribe to the view that this is a pattern and with so little between the teams and the Munster championship around the corner I don’t think there will be any lasting psychological issues.

Davy Fitzgerald will have his own challenges in managing the success in advance of the championship but he’ll also be very pleased with how the season is shaping up.