Michael Dempsey and Kilkenny always looking for that extra edge

In his decade with the Cats, their fitness trainer has sought to keep things fresh 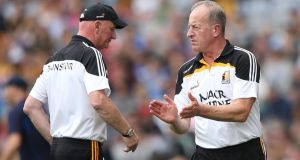 Michael Delaney: has served alongside manager Brian Cody since 2005 – a glorious period of success in Kilkenny hurling. Photograph: James Crombie/Inpho

Plus ça change, plus c’est la même chose – except when it comes to Kilkenny hurling. Because the one constant in preparing for this their 14th All-Ireland final in the last 17 seasons is that everything changes.

Michael Dempsey hasn’t been a constant part of that, although as Kilkenny selector and fitness trainer since 2005, only Brian Cody himself now surpasses his longevity. What Dempsey has continued to preach during that time is that sport is not an exact science, nor indeed is peaking for an All-Ireland hurling final.

“There are a number of factors,” says Dempsey. “It depends on the block or period of time in between matches, because some years you have more matches, and other years less.

“There is a science attached to that, but there’s also the coaching eye, or instinct. Having been through it before is an advantage. But you also have to look at individuals, within the set-up. Recovery is hugely important, because you won’t be catching up on fitness this time of the year. The focus is mainly on skills, speed, and how you want the team to play. Although you can’t afford to lose intensity either, or overdo it.

“So it does follow a certain pattern, but you do need to adjust it every year. Because it’s about keeping players interested, by keeping some variety . . . it’s mostly about keeping it fresh.

“It’s very much in the here and now. . . every new team you play poses its own challenge. A lot of the focus is getting your own game right, but it’s also getting ready for the team you’re going to play. And that’s always different, that’s always the new challenge.”

Dempsey is a football man, from Laois, who ended up a selector under Cody by accident, not by design. A native of Ballyadams, and winner of eight Laois football titles with St Joseph’s, Dempsey managed both the Laois seniors and under-21s, before moving to Kilkenny in 2002. Inevitably, he was drawn into the hurling orbit, and after managing St Martin’s to an intermediate county title, ended up as Kilkenny under-21 selector, alongside Martin Fogarty (together they won All-Ireland tiles in 2003 and 2004).

“I’ve probably been coaching at some level since secondary school, including coaching myself,” says Dempsey.

“And I think the very good players have an ability to self analyse, self-reflect, and see what they need to change, to be a better player. I think that’s what the best players have, same as the best golfers, or athletes . . .

“Sport is so complex. People tend to focus on physical fitness, or skill, but it’s the whole psychological side, the whole attitude. We like to simplify it, and say that team is fitter, or faster, but it’s also about the mindset of players. It never stays the same.

“So it is multi-factorial, and Brian Cody has a great instinct for that, and has created an environment where there is mutual respect, and everybody knows what they have to do, and are given the freedom to do that. Look at any successful team, and it’s the overall environment that contributes to the success, whether that’s an athlete or a team.

“I’m not privy to what Galway are doing, but I’d say theirs are fairly intense sessions. It’s how you plan your year that’s crucial. If a team has been through a long campaign, you have to be more sensible about the training. You train hard, but also smart . . ..

“It’s not always about searching for more. Because you are dealing with players who have a life outside of sport, so there has to be a balance in all of that. You can’t just make it up as you go along.”

And you definitely not make a 14th All-Ireland final in the last 17 seasons without that willingness to change.