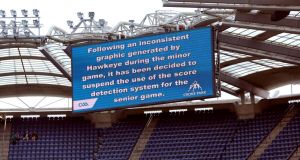 After the Hawk-Eye malfunction the decision was taken not to use the technology for the senior hurling semi-final between Limerick and Clare. Photograph: Donall Farmer/Inpho

The Limerick county board was objecting to the fact the teams were tied after normal time, after Hawk-Eye malfunctioned and incorrectly overruled two umpires who signalled Barry Nash’s early effort as a point, even though the graphic on the big screen clearly showed the sliotar bisecting the posts.

This has subsequently been explained an “error in match-day set-up” of the Hawk-Eye technology.

However, the CCCC has bypassed the unique circumstances and the new technolgy in its judgment this evening, simply insisting in a brief statement that the appeal has been rejected because “no objection or counter-objection maybe submitted on grounds that a referee had incorrectly allowed or failed to allow a score”.

Limerick had signalled before today that they were likely to take their case as far as they could, “one step at a time”, and they may now appeal the CCCC’s findings with the Central Appeals Committee (CAC).

Should that prove unsuccessful, an appeal to the Disputes Resolution Authority (DRA) is possible.

Keith Higgins becomes the latest Mayo stalwart to hang up his football boots 12:54
‘Don’t write me off yet’: Conor McGregor to fight on after Poirier knockout 11:35
Tony Finau shares the lead heading into last round in La Quinta 11:21
Sunday’s Thurles card called off due to snow 11:10
Conor McGregor stopped by Dustin Poirier in second round 06:33
Crossword Get access to over 6,000 interactive crosswords