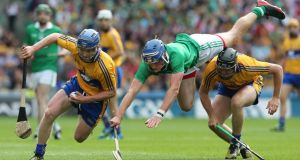 Clare delivered the sort of performance that David Fitzgerald’s young team were considered capable of or likely to access at some stage in the future but not widely expected of them yesterday.

Their tactical deployment worked to perfection and the grand stage inspired in them the lack of inhibition to exploit their skills and pace nearly to the full. More deft and lively in moving and using the ball, they struck early and had the bulk of their winning margin assembled within quarter of an hour.

Their reinforced defence – with Patrick Donnellan again playing sweeper in front of the full backs – clamped down on Limerick and the sense of unease within the ranks of the Munster champions was palpable.

Any time it looked vaguely possible that Limerick could get back into contention Clare swept back at them to ensure that a converging scoreboard never became a source of encouragement for their beleaguered opponents.

At the heart of Limerick’s malaise was a meltdown in the free taking of Declan Hannon. According to his manager John Allen afterwards, the full forward had been shooting the lights out in practice and had better statistics than Shane Dowling, who eventually came on and converted all of his frees apart from a late thrash for goal.

Calamitously for Limerick however, Hannon’s conversion rate would come in at 33 per cent, two from six in the first half, before the duties were switched to Dowling. All of them were scoreable and it was one of the harder awards that got him off the mark in the ninth minute.

It was in stark contrast to Colin Ryan’s clinical nine frees and no wides, which kept the Clare scores ticking over. More to the point you could sense Limerick’s reservoir of self-belief beginning to drain away.

Ryan’s first free was a smart cross-field switch to Donnellan, who had capered up the field unmarked and was able to shoot Clare’s first point. It indicated the extent to which Limerick were not mentally tuned in. Another overlap saw Patrick O’Connor double the score.

Tactical coup
A key tactical coup was the positioning of Tony Kelly on Limerick captain Donal O’Grady, the under-21’s nimble footwork and speed created difficulties for his veteran marker and among the outcomes was a four-point contribution to Clare’s total.

Pádraic Collins, switched to centre forward, was too lively to facilitate Wayne McNamara’s attempts to impose his favourite game as a physical bulwark and although the Limerick centre back battled away, Collins scooted in for three points.

As expected Darach Honan and Conor McGrath constituted a two-man full forward line and whereas Limerick’s defence was occasionally rigorous and hard to break – including ironically in one passage of play just before the critical goal when Honan and McGrath were shut down in an attack – they were holding positions rather than marking opponents.

Moreover, there was an ill-concealed air of panic about the backs, who appeared spooked by Clare’s various switches and the ease with which they engineered space and opportunity. Paudie O’Brien battled away in the second half but as a unit it was a day to forget.

Scrambled goal
The goal was yet another disaster – the ball driven in by O’Connor and the initial danger when McGrath got to the ball first appearing to pass before a ruck on the ground ended with Honan getting a toe to the ball and poking it into the net for a 1-4 to 0-1 lead with fewer than 12 minutes gone.

With the back eight in trouble, the attack offered little relief as desperation all too quickly became a keynote.

Limerick supporters must have shuddered at the sight of individual players trying to burrow through on their own and invariably taking the wrong option in a revisiting of old-style failings in a team whose considered use of the ball and unflappability had been a strength throughout the successful provincial campaign.

To make bad worse, Séamus Hickey, Limerick’s covering wing forward, was taken off with a knee injury after just quarter of an hour.

Graeme Mulcahy, who was Limerick’s most dangerous forward, was denied what looked a penalty after running at the Clare defence in the sixth minute and having his arm pulled when shooting. Patrick Kelly saved alertly and Hannon missed the 65.

Mulcahy continued to take on the defence but with a lack of quality ball, he had too much to do to penetrate and was rarely left in the company of a single marker for too long.

Clare’s defence also played with aplomb, their supplemented cover meshing perfectly with good support play to make them hard to break down and in another improvement their movement of the ball was accurate and undisrupted.

The major step-up for Fitzgerald’s team was however the conversion rate. For a team whose finishing had been epically wayward, Clare were models of precision.

Just four wides in the first half and one in the second contrasted with Limerick’s difficulties which weren’t all from placed balls.

Dowling’s frees helped Limerick clip the half-time margin, 0-6 to 1-10, but Clare never let it fall below four and at times got it up to eight. In other words the outcome was never in doubt.

Clare march into a first All-Ireland final in 11 years with a young, improving team and hopes as high as they used to be across the border just a couple of days ago.