Limerick and Lynch leave nothing to chance against Galway 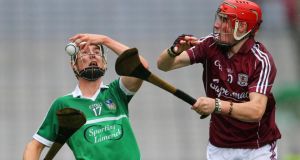 Ronan Lynch shot an impressive 13 points to help secure both revenge and a rare All-Ireland minor hurling final place for Limerick on Sunday.

Lynch was named at midfield but played in attack and did most to secure the Shannonsider’s September 7th final clash with Kilkenny. It’s their first All-Ireland final since 2005 and only their second since 1984 when they last won the title.

It was a particularly sweet semi-final win having been denied by the same opposition at this stage last year following a Hawk-Eye error. An early Barry Nash point was wrongly ruled out in that tie and the game ended in a draw with Galway winning after extra-time.

There was no chance of fate intervening this time as Limerick dominated throughout and, fittingly, Nash had a big say in the win. He scored Limerick’s only goal and finished with a healthy 1-3 tally.

Last year’s tie was a riveting encounter quite aside from the Hawk-Eye controversy. The teams were level 16 times during that game though Limerick assumed a commanding position early this time and never let up.

Tom Morrissey got the Munster champions off the mark with a point just seconds into the contest.

Conor Shaughnessy levelled it up with a Galway point in the second minute, but five Limerick points in a row, including two from Lynch, moved Brian Ryan’s side 0-6 to 0-1 clear.

Peter Casey was also on the mark while Nash opened his account in the fifth minute.

Galway were kept in the game by 10th and 26th minute goals, both from wing-forward Conor Whelan. His first was a low, scuffed finish from close range but his second was a beauty following a lengthy solo run down the right.

Limerick were always in control, however, and picked points off virtually at will throughout the half.

They led 1-17 to 2-5 at the break and weren’t flattered by their nine-point lead.

Nash shot Limerick’s goal in the 24th minute after a great high catch and lay off by Morrissey.

Lynch helped himself to seven points in the half while Nash tallied 1-2.

Things didn’t get much better for Galway after the restart with the sides trading three points each.

Frustrated, Murphy opted to run in his full allocation of subs by the 44th minute as he sought improvement but Lynch’s 10th point of the afternoon and another from captain Cian Lynch put Limerick 1-22 to 2-8 up.

Galway needed goals in the run in and Brian Burke went close at one stage but none arrived.