Tipperary’s hero of 2010 final believes, if anything, Cats are getting a little stronger 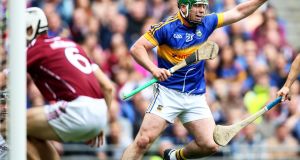 The difference between Tipperary and Kilkenny, by Lar Corbett. Richie Power did have hurling sliced away from him at 30 while last season Corbett knew full well he was in the way but the pair of them are a picture of polar opposites in letting go.

Power spoke this week about the hurt, the regret, the struggle with life after the game. Lar just went back to work in the pub.

“The one question you are asked hundreds and hundreds of times is do you miss it? I think it is very important when you play for such a long period of time, when it’s over it’s over. I think you have to change straight away.

“Because if I miss it this year am I going to miss it every year? When you are working for yourself you seem to work harder at your business than you do because the sport is gone.”

Another major difference though is Corbett has the glee of winter nights among carefree Thurles Sarsfields boys hurling into manhood. Power was denied that cathartic experience with Carrickshock.

Either way, the game waits for no man. Never has.

The Kilkenny and Tipperary rivalry tumbles on without them on Sunday. Whereas Power finds that tough, Larry Corbett is grand with himself.

And nobody will be flinging a hurley at him.

“I started working for myself in 2011. If you started thinking about what happened last week you are taking your eye off the ball. When I retired I knew it was very important with concentrating on what’s next. I have people working for me. It gave me a great focus once I finished the sport.”

Corbett, speaking at the Eir Sport Sports book of the year for 2016 launch, was then asked the big question t. Why, besides the 2010 final, do Tipperary struggle against Kilkenny.

“I don’t have an excuse for that. They have won more big games than we have won and they are the facts. You can go back to the league final in ’09 in Thurles. We thought we had that but they got it back to a draw and it went to extra-time. In 2009 (All-Ireland final), for one split second we thought we had it but they got two goals in 90 seconds. In 2014, you’re coming up to HawkEye, to the replay.

“I don’t know but when it comes to the tight games they seem to get over the line. Do they believe a bit more? I don’t know but they get over it. If I could answer that question wouldn’t we be able to change it around. It’s a serious question. We don’t fear Kilkenny and we look forward to playing Kilkenny. That has always been the way.

“We seem to bring the best out of each other but in the games you’re talking about we just haven’t got up to that height bar 2010 and even in 2010 we scored four goals but up to the last two or three minutes there was only two or three points in it. We ended up winning by seven but before the last 90 seconds they had it back down so close so you never, ever have them beat.”

The sense this season is that Tipperary are a better team, that Waterford showed Kilkenny to be beatable. Corbett sees all that as setting up Tipperary for a heavy fall.

“Yeah, I think that is the rock that Tipp could perish on. And the reason I say that is the amount of people I have met up and down the country who say this is not the same Kilkenny team. I can’t understand that. They are going for three in a row.

“If Tipp think they have an advantage because Michael Fennelly is not playing, that is another rock they could perish on because there are players who will step in to fill that gap. Kilkenny are coming back in again, coming back in under the radar and exactly what you are saying, that is what people are thinking around the country. Brian would love to hear that.

“They are the best team in the country for the last three years, they are going for three in a row and nothing has changed. If anything, I think they are getting a little stronger.”

And what of John “Bubbles” O’Dwyer? “I wouldn’t start Bubbles, and I’ll give you the reason why: It’s because you need someone like Bubbles when the game goes into the melting pot just after half-time.

“When he came on the last time we all knew something magic was going to happen . . .

“You’ve two sides of the coin here, I’d rather hold out.

“ I’d rather have . . I won’t call it my safety card, but the bit of magic that you do just need in an All-Ireland, and he is capable of doing it. I always believe that your first forward coming on should be better than your last forward starting, because you want him as a game-changer, you want him to do something that maybe hasn’t been done in the first 40 minutes.”

And goals, of course, Tipp will need goals.