Kilkenny: where the irreplaceable are replaced with little fuss 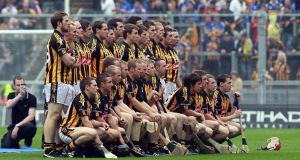 The Kilkenny team lining up before the 2010 final against Tipperary. OnlyTJ Reid and Eoin Larkin have made it through from the Kilkenny starters of that final to the 15 that will parade on Sunday. Photograph: Donall Farmer/Inpho

“It’s a job you can stay doing. You can’t stay hurling forever. If you could I’d be right back. But it doesn’t work that way.” – Brian Cody, Irish Times interview, February 2014.

In early 2012, a notice appeared on the Kilkenny website which, in its plain understatement, managed to trap under a glass a few elusive vapours of the greatest puzzle in Irish sport and cultural life: the how and they why of Kilkenny’s imperishable excellence.

“John Dalton has informed the Kilkenny Senior Team Management and County Board that due to increasing work commitments he has had to, with regret, withdraw from the Kilkenny senior hurling panel. We wish John all the best and thank him for his outstanding service and commitment to the county.”

The Carrickshock man bowed out with no Kilkenny senior county titles and five All-Ireland medals, and that brief official salute was about as many brass notes and as much sentiment as he expected or probably wanted.

In decades to come, when this period of Kilkenny hurling exceptionalism is pored over, Dalton will be listed as one of the 15 black-and-amber hurlers who lined out in the county’s bid to secure the McCarthy Cup for a fifth successive time.

In winning that day Tipperary had not just added another summer to their collection, they had prevented Kilkenny from achieving a feat that was once in a century at best. They had saved themselves from the appalling vista of a Kilkenny five-in-a-row team.

Tipp’s faithful scattered from Croke Park that day giddy at the prospect of embarking on a dynastic period of their own, only to return the following September to discover that Kilkenny’s interest in extending their dominion hadn’t been diluted at all. Kilkenny took back their All-Ireland title in a manner that was stern and reproachful.

If tomorrow’s hurling final is seen as the latest instalment in Tipp’s bid to topple Kilkenny dating back until 2009, it is striking just how different Kilkenny are now. Tonight on Up for the Match and tomorrow on the airwaves and in the Sunday papers, there will be plenty of talk about “this Kilkenny team”. But which team do they mean?

Of the substitutes Brian Cody used in the 2010 final, only Richie Hogan remains. The others – Michael Rice, Martin Comerford, Derek Lyng and John Mullhall – have gone the way of John Dalton. They have retreated behind the marble, into the underworld of ordinary life, to be spotted at club games, in the supermarket or waiting at traffic lights. Former Kilkenny hurlers.

In January 2103, Dalton’s fullback partner Noel Hickey read the tea leaves and decided that that was it for him.

“I have done my time. I leave with no regrets” was the key note – and, indeed, the whole – of his address. Why would he?:

Hickey had at the time equalled Henry Shefflin and Noel Skeehan in collecting nine All-Ireland senior medals. “I might stick them up on a wall sometime, maybe” he promised John Knox in the Kilkenny People. And off went Hickey.

The precocious talent that was Cha Fitzpatrick finished up at just 26 in 2011 when he could no longer claim a starting point: that 2010 final proved to be his last championship start for the county.

Tommy Walsh knew when it was time to shuffle off as well, reading the signs in the spring of 2014. He started in his customary number five shirt against Tipperary in that season’s league encounter, but was withdrawn at half time and was replaced by his brother, Padraig, in the following league game against Dublin.

As it turned out that was the last time he was chosen at half back for the county as he was chosen more selectively in his original role as a half-forward and, towards the end, among the substitutes in the shade.

“I knew when I was moved from the backs to the forwards that it was coming. I never wanted to go out on a high. My thing was to go when I wasn’t picked,” he told John Harrington during an interview for the GAA’s in-house website prior to his “Legends” tour.

“I didn’t think it would end that early, and I think I was hoping I could get another year or two out of it. I was obviously hoping to go on as long as I could, and it did end a bit early for me.”

These were the disappearances that other counties, other managers, other aspirants had long been waiting for.

From 2006 to2009, when Kilkenny were operating in a different realm and all the other elite counties were fighting their way through a thin fog of despair, the one source of comfort was the fact that they couldn’t go on forever.

Other teams might not be able to tether Delaney or Walsh or Shefflin. But time would, as it must. And when it did, Kilkenny were supposed to remain obedient to the clichés, unwritten and otherwise, which govern the patterns of GAA inter-county life.

The opposite has happened. Because the single miracle of tomorrow’s final is that nothing has changed about Kilkenny 2010 except for the composition of the entire team.

The irreplaceable ones have been replaced with little fuss. The greats have stepped down. And here are Kilkenny back for more in another September with the big, ambling slope-shouldered figure at the helm.

“At half time I said very little. Essentially you have to hand it over to the players, They said an awful lot of things to each other. They have an ambition, a desire, a hunger. You pick the players: you have to trust them then. Their desire is total.”

That was Cody talking in the minutes after Kilkenny had relieved Tipperary of their All-Ireland ownership in the semi-final of 2002 – and in doing so, beaten the Premier county for the first time in the championship for 35 years.

Cody had dispatched Jimmy Coogan from the reserves and the Tullaroan man responded with a whistling 1-1 which swayed the game. Tipperary couldn’t have known it then but it would take the county seven years to reach another All-Ireland final and eight to win the thing outright. And during that period Kilkenny sculpted their thoughts and their drive. More precisely, Cody did.

Eighteen years and he has side-stepped all efforts to join the ranks of talking-heads or celebrities, or becoming a public figure other than in Sunday guise, dominating the sky on black-and amber-coloured hurling days and submerging himself again in the Marble City.

So the small miracle of tomorrow’s final is the most familiar part of it: Cody out there on the sideline, 70 minutes away from an 11th All-Ireland; from a second three-in-a-row; from doing it all again.

Someday he will decide to follow the players he has shepherded through and step away. And only then will the how and why of it become explicable.