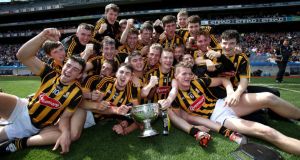 Kilkenny minor team celebrates with the trophy after defeating Dublin in the Leinster final at Croke Park. Photograph: Inpho

Kilkenny looked in trouble as they fell behind by two points with four minutes remaining but a superb finish culminated in winning points by substitutes Edmund Delaney and Conor Hennessy.

After the sides traded early frees through Matthew Oliver and Andrew Gaffney, the holders seized the initiative in the sixth minute when Tadhg O’Dwyer was afforded too much room when slipping past Eoin Foley to fire emphatically beyond Eoin Skelly.

Dublin were struggling to make an impact in attack during these early promptings although Oliver’s accuracy from placed balls ensured they remained competitive before Fergal Whitely landed their first point from play in the 15th minute.

Joey Cuddihy struck a glorious point for Kilkenny a minute later but Dublin began to find their collective feet with the impeccable Oliver bringing them level with three successive frees.

Crucially, Kilkenny regained a degree of authority as the half drew to a close with two excellent points by John Donnelly handing them a narrow 1-7 to 0-8 interval lead.

Dublin needed a bright start to the second half to stall Kilkenny’s momentum and they struck inside a minute as substitute Alex Considine burst through to crash home across Shane Murphy.

Despite their opponents responding like champions through two Gaffney frees and Richie Leahy’s fine score, Dublin dominated the subsequent seven minutes with Oliver and Eoghan Conroy landing a brace apiece.

However, with Richie Leahy coming to the fore for Kilkenny in the closing stages, Dublin struggled for primary possession with Delaney and Hennessy landing the decisive scores at the death.