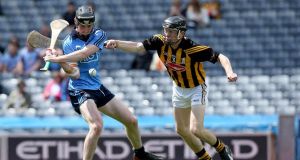 Dublin started brightly but some errant shooting undermined their early control with Seán Gray’s free in 6th minute their solitary reward for some initial pressure.

In contrast, Kilkenny looked far more economical in attack with successive points from Alan Murphy and Ronan Corcoran handing the Cats the lead by the 9th minute.

That advantage was increased within a minute when the lively Liam Blanchfield turned sharply before resisting the challenges of Shane Barrett and Mark McCallion en route to slotting to the net from ten yards.

Kilkenny’s touch was fore more assured than that of their opponents who were struggling to show any of the form that had seen them overcome Wexford and Kilkenny en route to the final.

Points were added through Murphy and Ross Butler before Grey finally ended a barren sequence of fifteen minutes when slotting over another free in the 21st minute.

Rian McBride added a glorious score for Dublin soon after and they Blues were further buoyed in the 25th minute as Sean Ryan fired to the net at the second attempt following a telling incision through the middle by McBride.

However, Kilkenny responded to that body blow in superb fashion with Murphy landing two sublime scores to add to a wonderful point from under the Hogan Stand by Blanchfield.

Dublin added two late scores through Con O’Callaghan and Grey to trim their arrears to just four points (1-9 to 1-5 by the interval).

Any hopes of a Dublin comeback were quickly dispelled within the opening ten minutes of the restart as Kilkenny clicked through the gears with Murphy leading the way with three unanswered points inside the opening four minutes.

Dublin’s body language reflected their overall unease as the holders began to stretch clear through points from Sean Morrissey and Blanchfield while Murphy continued to punish an increasingly ill-disciplined Dublin defence.

An almost inevitable second-goal arrived for Kilkenny in the 43rd minute as a slip from Daragh Butler was seized upon by Blanchfield who hammered an unerring finish beyond the horribly-exposed Treacy.