Kilkenny once more masters of the endgame 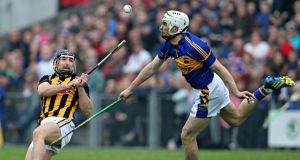 Kilkenny’s Richie Hogan gets away his shot despite the challenge from Tipperary’s Brendan Maher during Sunday’s Allianz Hurling League Division One final at Semple Stadium. Photograph: Inpho

In the end it was one piece of quick thinking and clinical execution that separated the sides. TJ Reid’s short line ball to Richie Hogan and clever run into space in the left corner of the attack opened up the opportunity and a deft pass and cool finish did the rest. Only seconds remained, after 90 minutes had nearly failed to separate them, and Tipperary couldn’t engineer a response.

It was fitting that Reid and Hogan had contrived the winner because between them they had kept Kilkenny going with a shared total of 2-17. Reid’s two penalties got the holders back to the table on two separate occasions when Tipp appeared to hold all of the cards.

This was a riveting contest. It flew from end to end like a tennis match and buzzed with the edgy undercurrent that at times sent shockwaves through the fixture.

In the 25th minute Kilkenny manager Brian Cody was involved in an angry confrontation with the Tipperary bench, the details of which were cloaked in the omerta of the sideline when questions were asked afterwards.

During the past five years the counties have met in sudden death contests on eight occasions and Kilkenny have now won seven of those. It was the eighth league title the county has won under Cody’s management and five of those have been followed by All-Irelands.

It was an important statement for Kilkenny who although they were recording three- in-a-row in the competition, are also seeking to recover from an underwhelming 2013 championship and renovate the team.

Yesterday they were under pressure for long stretches of the match, as Tipperary applied pressure to secure what would have been a restorative victory after 12 months that have been actually worse than those endured by their opponents.

Eamon O’Shea’s responses afterwards were terse and in private you’d expect the Tipp management to be deeply frustrated, having had the chances to notch up a much-needed win in this fixture.

Although O’Shea declined to get involved in post-hoc recriminations, Tipperary also came out on the worse side of officiating errors, with Colin Fennelly’s 10th-minute point looking wide on video replay and a wide attributed to Noel McGrath in extra time appearing to have been a score. Similarly referee James Owens made some contentious decisions and was at times slow to whistle.

Tipperary did, however, blow a succession of chances in the last 10 minutes of ordinary time to put some distance between themselves and their opponents.

John O’Dwyer – their most dangerous forward with 1-3, Patrick Maher, who worked as ever, and replacement Shane Bourke all wasted good possession with the teams level, profligacy that appeared to carry an immediate tariff when Michael Fennelly, whose hard running and eye for a score decided last year’s league final between the counties, stormed down the middle for two points in the 68th and 69th minute.

To Tipperary’s credit, having failed to strike for home with earlier chances they somehow clawed back the deficit thanks largely to Kieran Bergin, who announced himself in this fixture last year.

Firstly, the urgency of his challenge for a ball nudged it to Bourke who pointed. Then in the final minute of injury-time, he was on hand with a supporting run to relieve a bottled-up Patrick Maher and tie up the match.

Ultimately, Kilkenny’s composure was decisive. Tipp recovered from a poor start, during which Pádraig Walsh, who switched from centrefield to his more usual wing back position within half an hour, Hogan and Reid with a couple of trees, put the holders four ahead.

Between then and the half- hour mark Tipperary managed to stitch together an impressive 1-11 to 0-4 response, which moved them six ahead with the road opening before them.

The first penalty changed that dynamic. Henry Shefflin, who passed a scoreless afternoon in the company of Cathal Barrett, was dispossessed, but Mark Kelly was fastest onto the ball and although Tipperary clearly felt he barged into Pádraic Maher, the full back had his hands on his marker, looked to have pulled him over and was yellow carded.

Reid converted the penalty, having just previously hit a golf shot of a free from around his own 65, and at half-time the deficit was down to two, 1-9 to 1-11.

Tipperary extended the lead after the break with Denis Maher pointing from play and another free from Séamus Callanan, whose dead ball striking was flawless, but who didn’t get to do much else under the supervision of JJ Delaney.

He added a further free in the 47th minute to stretch the lead to three before the patient work was undone by the second penalty. Tipp’s defence had been coping reasonably well.

The full back line conceded just two points from play over 90 minutes, even although they also gave away the penalties and Brendan Maher did a good job on one of Kilkenny’s form forwards, Colin Fennelly.

Barrett conceded the second penalty by crashing into Reid, who managed to recover in time to convert the award even more emphatically than the first. From then on the lead changed hands three times.

Fortunes continued to undulate in extra time and in the end it was a mistake by Tipperary goalkeeper Darren Gleeson, who over-hit a pass from a free into touch, that created the winning score. Although Michael Cahill, who had played very well, won possession from that line ball his clearance under pressure went over the sideline.

Lester Ryan raised the trophy and Kilkenny celebrated. They head in to the championship, not with all issues resolved but they couldn’t have done any more in the league.