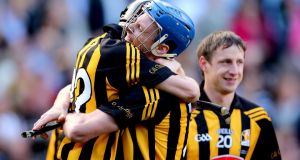 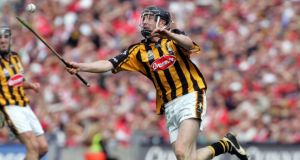 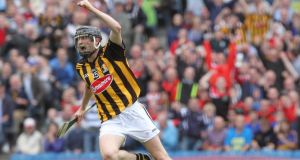 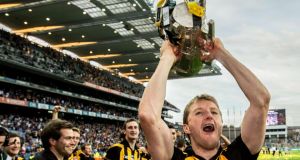 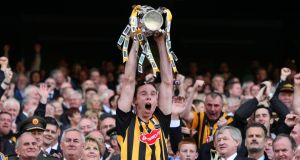 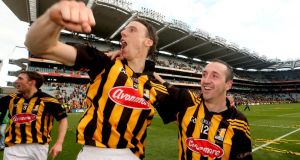 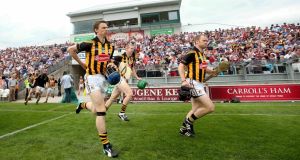 Lining out for this year’s championship opener, two of the three are now gone. Photograph: James Crombie/Inpho

Hot on the heels of David Herity and Tommy Walsh, the latest Kilkenny duo of Brian Hogan and Aidan Fogarty have announced their intercounty hurling retirement.

Between them they have 15 All-Ireland medals and 17 Leinster championship medals, but like Walsh and Herity they found their influence and playing time reduced in 2014.

“It is with great sadness that I wish to announce my retirement from intercounty hurling,” he said on Wednesday morning.

“The past decade in the black and amber jersey, have been some of the greatest times of my life. I have had the opportunity to play both with, and against, some of the finest players ever to play thegame. I leave with the greatest of memories of the best of friendships.”

“I feel extremely privileged to have been involved in one of the most successful periods in Kilkenny hurling; and as I leave, what I’ll take most - is the memory of the time spent with the lads, who I was lucky enough to call my teammates and friends.

“I’d like to thank my club, O’Loughlin Gaels for their constant support and contribution to my development as a player. In particular, I’d like to thank them for giving me the honour of captaining the Kilkenny team in 2011. It was an incredible honour to lead such an amazing group of players, and I did so as a proud O’Loughlins man.

“I look forward to returning to St. Johns Park to finish my hurling career where it all began.

“I’d like to take this opportunity to thank Brian Cody and his management teams, for seeing potential in me, and for giving me the opportunity to fulfil my childhood dreams and aspirations.”

Now is the right time

Hogan started in his usual half back slot in this year’s drawn All-Ireland final but did not feature in the replay win, he struggled throughout the season with niggling injuries.

Similarly Aidan Fogarty, who also announced his retirement on Wednesday morning, featured in this year’s drawn final but was unused in the replay.

The 32-year-old corner forward joined the Kilkenny Senior panel in 2003 and has eight All-Ireland medals. In 2006 he won the man-of-the-match award in the All-Ireland final having scored 1-3 from play.

“I make this decision totally comfortable in the knowledge that now is the right time for me to move on,” he said. “Playing hurling for Kilkenny at the highest level has been exciting, enjoyable, rewarding and, at times, challenging.

“I owe a huge debt of gratitude to the people who have supported, encouraged or who have just been there for me during this chapter of my life.”

As the three before him had all done Fogarty also mentioned the influence of manager Brian Cody upon his playing career.

“I wish to thank Brian Cody and the various management teams for giving me the opportunity to be part of such a successful panel for so long.

“I remember my late uncle, Pa Dillon for his pride and confidence in me. I wish the Kilkenny team and management every success in the years ahead.”

Kilkenny GAA added that they would like to acknowledge the “huge contribution” of the two players.

Tipperary County Board have announced the retirement of John O’Brien, thanking him “ for his great contribution to Tipperary hurling over a long number of years having represented the county at minor, under 21 and senior levels.”

“It has been an honour to have represented my county at senior level since my debut in 2001,” he said.

“ I would like to thank everyone who has supported me and made it possible for me to play, most importantly my family and friends, my club Toomevara, the management and backroom teams throughout those years which are too many to mention and also the Tipperary public.

“I have made many great friends over those years and I would like to wish the current panel and management team the very best of luck.”