Keeping on top of Tipp: the JBM files 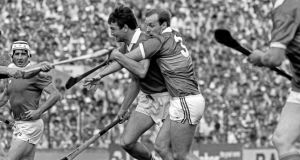 Jimmy Barry-Murphy in action against Tipperary during the 1985 Munster senior hurling final – widely regarded as his finest display for Cork. Photograph: Billy Stickland/Inpho

Two years ago when Cork and Tipperary last met in the senior hurling championship, the match in Páirc Uí Chaoimh was worth two historical footnotes. Tipperary’s narrow, one-point victory was the county’s second in three visits to the Cork venue but the previous win in 2008 had been the first since the 1920s.

More exclusively Cork manager Jimmy Barry-Murphy, then beginning his second tour of duty with the county, actually lost against Tipperary for the first time after a senior inter-county career spanning 37 championships and eight meetings with Cork’s oldest rivals.

This weekend is also historic for that rivalry as the counties meet in Croke Park for the first time in championship – allowing that for some peculiar reason they played the 1896 Munster final replay at the same venue before it belonged to the GAA.

Maybe Barry-Murphy was lucky in that his playing career was almost exactly co-terminus with Tipperary’s famine, the 16-year absence of the county from Munster’s roll of honour between 1971 and ’87, but looking back maybe it was Tipperary who were unlucky.

If his managerial record in the fixture is comparatively a postscript it has been none the less significant.

Paradoxically the match two years ago, although it ended in defeat, marked a more hopeful beginning for Cork than the victory in the 2000 Munster final, which was the last success of Barry-Murphy’s first tenure, a season that ended a match later in surprise defeat by Offaly after which he stepped down.

A one-point defeat proved a modest but firm platform for a season that ended with an All-Ireland semi-final place earned through the qualifiers and in the time since significant improvement each year – the maintenance of which is up for grabs tomorrow.

But it was his performances as a player in Munster matches against Tipperary, which helped to establish the JBM legend.

Having debuted for the county hurlers in 1975, Barry-Murphy began the following season on the bench, his omission from the team to play Tipperary considered a surprise. He was brought on by a selection panel that included the legendary Christy Ring (who both championed and acted as mentor to him in his early career) after just 22 minutes in place of the injured Bertie Murphy, who would also go on to become Cork senior manager.

At the time Cork were struggling but, slotting in at centre forward, the replacement scored a point and changed the course of the match and with it the season that would mark the first All-Ireland in the county’s three-in-a-row 1976-78.

Listing the reasons why Cork won – by just a point, Paddy Downey in these pages reported: “Of all these factors, two were predominant – Jimmy Barry-Murphy’s brilliant display at centre forward all through the second half and two superb saves by Martin Coleman in quick succession from Power and Butler when Tipperary were two points up in the second half.

“But Barry-Murphy’s arrival on the 40 changed the scene radically and, as it turned out for Tipperary, irretrievably. He gained possession frequently, distributed cleverly and ran on himself when prudent.”

When the counties next met three years later Cork were on course for an All-Ireland four-in-a-row but still the margin was minimal. Again Barry-Murphy stood out, scoring the critical goal.

“Barry-Murphy, who was by far Cork’s best forward, took his chance beautifully when a shot by Seán O’Leary rebounded off the front of the post to give Cork a lead of 1-11 to 1-10.”

Of the six championship matches he played against Tipperary, only one was forgettable – the 1980 semi-final, his performance during which was described in these pages as “a disappointment” although there were mitigating factors.

“For the most part he was lethargic and slow,” reported Seán Kilfeather, “and it seemed that his recent injuries may have taken the edge off his game for the moment. One always has the impression however that he will spring into action and woe betide the defence that underestimates him.”

Jimmy Barry-Murphy had scored two goals earlier in the match and his display was acclaimed as his best Munster final to date. Cork went on to win the All-Ireland. Within a year he went one better in the 1985 Munster final. Cork’s manager was Justin McCarthy and in his autobiography Hooked he remembered the day.

“That was Jimmy Barry-Murphy’s finest hour for Cork. He scored a goal and three points from play including one amazing effort over by the left-hand touchline near the end. He set up two other goals, while he won three frees that John Fenton scored 1-2 from.”

Nicky English played against JBM in the early years of his own career and for the last time in that 1985 final in which he scored 2-3 himself.

“In that era he was my idol and there was no-one bigger in the game. He was man of the match against us in the ’85 final. I played well but there was no doubt that he was the best player on the pitch. I got to swap my jersey with him in 1984, which was a major highlight of my career.”

Tomorrow’s encounter is evenly balanced and Jimmy Barry-Murphy wouldn’t be under any illusion that past performance is a guarantee of future outcomes but then again he would have known that coming on as a sub in 1976 and before all of the other skirmishes scattered through four decades.