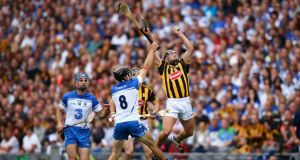 Kilkenny’s Richie Hogan in action against Waterford in the recent All-Ireland semi-final at Croke Park. Hogan has been fortright in his views on the current format of the league structure. Photograph: Inpho.

This is a drum I’ve beaten before but it needs to be beaten again. Why? Well a wide-reaching decision with fairly serious consequences for many hurling counties was made at a Central Council meeting a short while ago.

It almost slipped our attention with all the interest in provincial finals and back doors. According to various media reports there was more than a little surprise when a decision was taken when many delegates were of the opinion that such a decision wouldn’t be made until September.

Of course the timing of the decision isn’t the substantive issue here. The issue being “debated” had to do with the structure of the All-Ireland Senior Hurling Championship and the Allianz National Hurling league.

The result of the “debate” is the status quo remains and the weak stay weak or fade away and a diminishing handful of stronger counties remain at the top.

As somebody who saw action from the inside in three different divisions of the hurling league I think I have some idea what life is like for some of the counties affected by the continuation of the status quo with this ill-judged decision.

The key questions need to be asked again. How does the GAA expect hurling to develop? How will the present teams outside of the top six/eight develop into sides that can hope to challenge the cartel?

They haven’t a hope as things stand.

Yes, we have a very high standard being played by the top teams, but the second six to eight sides can’t expect to realistically challenge because they seldom get to play any of those above them in the pecking order.

Division 1A in its present state does deliver some quality games but it also has delivered some fairly mediocre fare.

I’ve written before that hurling is fast becoming an elite game for elite players in a very small number of counties. The life is being squeezed out of the rest. Of course there are many factors at play in having such a gap in standards between the top, middle and bottom.

The fact remains, as it has done almost since the foundation of the GAA, that only a handful of teams have a realistic chance at winning the top prize in any given year. The rest have as much hope of winning a substantial amount in the new National Lottery.

Granted, there’s something very right being done at the top. But at the same time there is something very wrong afoot when so many counties have been so loyal to the game and yet are given so little chance to improve.

Why are the decision makers making it so difficult for the weaker teams to get a leg up? Is it politics? Should there be a separate board for hurling?

The shop window (the championship) has a number of attractive games every year (one, so far this year) but surely the more competitive the teams, the better the competition.

Yes, I know there would be some one-sided games but players from teams like Carlow, Westmeath and the rest would then have a chance of “measuring” themselves against perceived better players.

I know there has been some rejigging with the league format over the years and a perfect formula hasn’t yet been arrived. But we now need a change for the same reason we always needed it and that is the development and growth of the sport.

As it stands too many counties are being marginalised. Who is doing this marginalising? I don’t actually know.

A restructured Allianz Hurling League, which is not the association’s number one competition, would give a greater number of teams the chance to play against better opposition.

When are we going to see Kilkenny or Galway playing a league match in the glens of Antrim again? Or the likes of Cork and Tipperary going to Carlow. Or Clare travelling to Westmeath to play in a meaningful game?

The structure of this present league, a league where there is no room for error, doesn’t give supporters enough games, doesn’t give managers much scope for experimentation and is totally stacked in favour of the top six.

Change is needed badly in both the championship and the league.

In the light of Kilkenny’s continuing dominance of hurling at senior level it was interesting to read the comments of present Kilkenny star Richie Hogan and his “hatred” of the current format.

Former Kilkenny hurler and manager Kevin Fennelly is not a fan of the game’s current All-Ireland senior championship format either.

The debate needs to begin and change needs to follow.