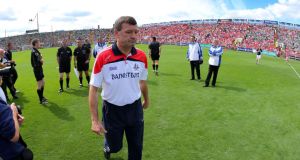 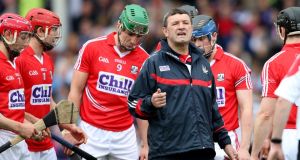 Jimmy Barry-Murphy: “Winning the Munster title was fantastic for us and I’m not going to try and play it down. It was a huge occasion and I got a fantastic kick out of it.” Photograph: Cathal Noonan/Inpho 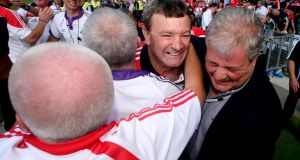 On the verge of his 60th birthday, how bracing it is to note that Jimmy Barry-Murphy’s first All-Ireland semi-final appearance came 41 years ago next Tuesday. Between hurling and football, manager and player, starter and substitute, Sunday will be his 14th All-Ireland semi-final – a run stretched out over two-thirds of his life. Some men are just giants.

The game still moves him, still scratches an itch that in most people would have long since fallen dormant. For a man whose legacy and name in Cork is secure regardless of what happens, adding another Munster title last month still stirred something within him.

“Being honest, it’s nice to win something. I can play it down all I like now, but winning the Munster title was fantastic for us and I’m not going to try and play it down. It was a huge occasion and I got a fantastic kick out of it.

“For the players – we all know how little success that group has had and I was thrilled. Not for myself because I’m around long enough to know you only get what you work for if you’re good enough.

“I remember doing an interview before the first round this year asking if we met Clare again, would the revenge factor be big. Revenge is a factor but it’s not enough. You must have ability as well and if you’re not good enough you won’t win.

“Look at Kilkenny over the last 10 years, the revenge factor didn’t count for much there. I’m not trying to be funny but you can go on negative energy all you like, but you have to be good enough. I was thrilled after the Munster final and for the Cork public as well. It was a huge occasion.”

An occasion that, for all the strides made under JBM since he took over in late 2011, possibly looked a distance away earlier this spring. The price paid for a 2013 season in which success was reached but not grasped on several occasions was a post-All Ireland funk that took a while to shake.

Barry-Murphy didn’t expect it and when it happened, had to move quickly to sort it out.

“Our form was terrible during the league really . . . It was very difficult to put our finger on it and I wasn’t accepting this hangover factor from the All-Ireland final. Having lost it, I thought that we would be even hungrier to go on and lash teams in Division 1B and sail out of it. But that wasn’t the case.

“We were up in Ballycastle and were two points down against Antrim and that type of situation was going from game to game. So I spoke to several of the players about it and got feedback. Kieran Kingston was concerned, wondering what he was doing wrong – and we said he was doing nothing wrong. From the players’ point of view, they were finding it hard to motivate themselves after the All-Ireland final and that seemed to be the factor.”

If there was a turning point, the mirror held up by Tipperary in the league quarter-final was probably it. To go so far behind so early on told them an awakening was needed. To find a way back into the game – even though they didn’t ultimately win – was just the splash of water to the face that was called for.

“They blew us away in the first 10 minutes and it was a shock to the system certainly. It was like the All-Ireland situation against Clare again, chasing down a 10-point lead which is terrible for a team. You can’t keep doing that

. . . We showed at least we were able to come back and give Tipp a decent game.

“You try to develop a panel that you look at the other teams and say, ‘can we match them?’ I hate pre-empting things but I really feel we can give anybody a game now and that we won’t be out of our depth. That’s what you try to aspire to – be at that level and kick on from there.”

Cork’s progression has been plain to see. This is their third All-Ireland semi-final in a row under Barry-Murphy and each has come flavoured with a different blend of expectation and realism.

It’s All-Ireland or bust for Cork people this year – a huge leap forward for a county that was happy enough to perform honourably in the 2012 All-Ireland semi-final against Galway.

“At the time, it looked that the back-up resources weren’t as strong as you’d like,” says Barry-Murphy.

“The nucleus of the team were giving great service but were probably coming to the end of the best of their days. You’d be afraid the gap would be too big to bridge to keep us competitive, but it’s our third semi-final in a row and that’s a great achievement in itself,” adds Barry-Murphy.

He believes the county is in a very healthy position now.

“I couldn’t be happier, progress was made. I’d be very pleased that despite the lack of success at underage level, we’ve got the very best players coming out of that system and they’re coming in to a panel with players that are strong.

“The lack of underage success has been bandied about. We’ve got some very good hurlers out of underage like Christopher Joyce, Alan Cadogan – all these lads played at underage level for Cork even though they hadn’t been successful.

“I firmly believe this, you needn’t be winning minor All-Ireland’s or Under-21s to be a really good county. Clare in my opinion right now have one of the best under-21 teams I’ve ever seen in my life. But again I don’t think for a second we wouldn’t be able to compete with them at senior next year.”

Pep Guardiola believes Man City deserve some luck in Europe 22:30
Barcelona nab away goal after going behind in Naples 22:19
Bayern Munich teach youthful Chelsea a European lesson 22:08
Battleoverdoyen only ‘50-50’ to take chance at Cheltenham 22:00
IRFU not consulted prior to Minister Harris’ recommendation to cancel Ireland v Italy 21:42
Crossword Get access to over 6,000 interactive crosswords