Galway hit Clare with the price of Leinster final redemption 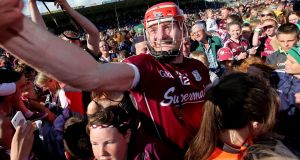 Galway’s Joe Canning with fans at the end of the game in Thurles. Photograph: Donall Farmer/Inpho

Galway stormed into the All-Ireland hurling semi-finals for the second successive year with a comprehensive win that pulled up the drawbridge on Clare’s latest campaign to rediscover their 2013 Camelot.

From the moment of Conor Cooney’s 15th-minute goal, the winners never lost the lead and never looked back. They were more effective in attack and gave an organised and formidable performance at the back that confined their opponents to sniping points and launching slightly frantic attempts to unhinge the Galway goal for the scores they needed to get back into the game.

Only Colm Galvin, whose pace and accuracy helped him finish the match with five points, had the sort of afternoon that his team needed and although there was effort and determination there was little of the finesse and precision that characterises the league holders’ play at its best.

Unusually they came out second best in the battle for ruck ball and all told found Galway too physically assertive and astute in their use of the ball.

Yet it looked like starting well for Clare. Having undergone heart surgery during the week, the county’s manager David Fitzgerald was sufficiently recovered to take his place on the pitch for the warm-up, as the weather picked up to bathe Semple Stadium in sunshine after the more volatile conditions of the first match.

A sharp voltage of concern must however have shot through the Clare sideline as the match unfolded, Galway started with more attacking purpose and a sturdier looking structure. They also had the advantage of a strong wind and pushed up on Clare puck-out to force Andrew Fahy to go longer than he might have wished into the teeth of the breeze.

Galway had made two changes to the team that lost the Leinster final at the start of the month. Manager Micheál Donoghue brought in Adrian Tuohy for Davy Glennon with Johnny Coen starting at centrefield and also Jason Flynn – whose omission for the Kilkenny match raised a few eyebrows – who replaced Niall Burke.

They quickly established the initiative going forward and could have stretched the early lead but for a persistent wides’ total. They scored enough to lead by a point, 0-4 to 0-3 when Joe Canning hit over an 11th-mimute free after Brendan Bugler had fouled him.

Four minutes later Galway struck for the most important score of the half – Conor Cooney running at the defence, outpacing the cover and striking an ordinary enough shot that Fahy will feel that he could have prevented.

The problem, as it developed for Clare was that they couldn’t construct sufficiently threatening attacks in response. Imprecise ball hit into the forwards was more often than not gobbled up by a Galway defence in which Daithi Burke was excellent and went on to have a superb game.

Strong though the breeze was, there were reasons for Galway to feel content with the half-time lead of 1-10 to 0-6. They had used the advantage well, got the goal and prevented Clare form making the sort of inroads on the scoreboard that had undermined a good first half against Kilkenny in the final minutes before the break.

Clare must have been anxious. They had struggled to make an impact on the Galway defence but were conceding frees and 65s to opponents for whom Joe Canning was in form with the placed ball.

By contrast Kelly’s radar was faulty. He missed a free in the 23rd minute from in front of the posts and a couple of minutes later had the team’s best goal opportunity when he got a run on the Galway defence. The unmarked Aaron Shanagher appeared to be outside his peripheral vision and as he closed on goal, Tuohy recovered to get in a great hook.

The performance of Daithi Burke and Aidan Harte sweeping at the back suggested that Fitzgerald’s team might struggle to organise a successful aerial bombardment when they had the wind in the second half. And that’s largely how it turned out.

Clare were now caught in the bind of trying to force the match while being open to the counter attack. To their credit they managed not to implode and even took the Canning goal back with three quick points but they couldn’t shut out Galway, who launched some great break-outs, tackling and running in support and Pádraic Mannion crowned one such move with a point.

The closest Clare got was on the hour when, given urgency by the arrival of Conor McGrath, who shot a couple of excellent points, and Colin Ryan who steadied the free taking, they got to within four but the latter shot wide when a point would have put just a score between them. Within a minute Cathal Mannion had started the margin expanding once more.

Forced to chase goals from close-in frees, Clare couldn’t crack the Galway rearguard for whom Canning took up the unusual role of sentry in the closing phase.

After the criticism they received for falling away against Kilkenny in the Leinster final, Galway were rock solid and now will re-engage with Munster champions Tipperary in next month’s All-Ireland semi-final – a re-match of the outstanding contest of last year, which the westerners won.