GAA statistics: Good start essential if Waterford are to spring a shock 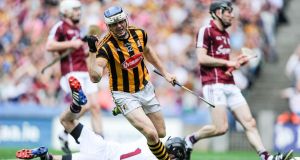 It’s not easy picking flaws in the Kilkenny team – but if there’s any chance of beating them you’ll certainly need to be out of the blocks quickly.

Interestingly, in the league Kilkenny trailed in all but one of their games at half-time, and that one-off came against Cork in Páirc Uí Rinn, one of the two games in which they actually won during a trying campaign. Their combined half-time deficit was 0-19 in their five league games and relegation play-off.

So far in 2015 Kilkenny have certainly been peaking late in the second half – from their final league game and the relegation play-off for example, both against Clare, they scored 1-22 in the second half which was again 57 per cent of their full game totals. They had trailed at the interval in both those encounters.

They of course went on to win both games though - Brian Cody’s team have lost only four championship games in the past five years, all of which they trailed at the interval and were hit for scores early in the game. The two common trends for victorious sides against Kilkenny since 2010 have been a half-time lead, and a strong lead in the first ten minutes.

Their combined concession in the first ten minutes of those four games was 2-14, while they scored just 0-7 themselves. By half-time in the same four games their combined trailing margin was 0-24. 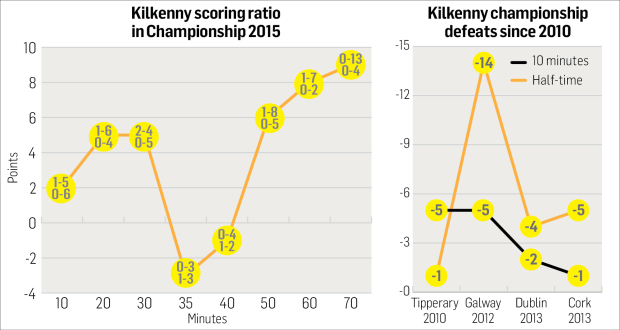 So against Tipperary in the 2010 All-Ireland final, Galway in the 2012 Leinster final, Dublin in the 2013 Leinster semi-final and in the 2013 All-Ireland quarter-final versus Cork, Kilkenny mustered just 1-26 in the four first halves, but 3-33 in the second halves.

That’s 60 per cent of their overall scoring coming after the break. The only one of those games in which they didn’t far outscore their first-half total was against Tipperary when they were hit with three goals in the second 35 minutes.

So while this year has seen two impressive championship wins from two to date, similar trends in their scoring prevail.

Despite big wins, Kilkenny have outscored their opponents by just one point in the opening ten minutes of games, showing that the same window that was exploited in 2010, 2012 and twice two years ago still appears to exist for a ruthless opposition to expose. They’ve been gradually growing into their games this summer, outscoring the opposition by an average of five points between the 10 and 20 minute mark and again between 20-30 minutes.

Then between 40 and 50 minutes that’s been up to six points, rising to eight in the 10 minutes ahead of the hour mark and then nine points leading on to the end game.

They have though been taking the foot of the pedal either side of the half-time break, a period in which Galway bagged 2-2 against them to stay in the contest. That poor showing during those two five-minute periods hasn’t necessarily been reflective of what happened in their four championship defeats, but their slow start/strong finish certainly has.

Either way though, for Waterford this Sunday or any side when up against the Cats, they’ll meet a team who always seem to find a way. The squad may have lost key leaders to retirement this year but the average age of the 15 against Galway in the Leinster final was still a very healthy 26 – with the overall squad being an average age of 25.

Moreover, they’ve managed their biggest score-per-game total in a Leinster campaign in 10 years this summer. Their total of 6-50 equates the exact same ‘scores for’ hit during the same number of games in 2005(3-25 per game).

Considering Kilkenny’s dominance under Cody though it’s hard to know what exactly to take from their often two-game Leinster championship, their average concession in 2010 was as low as 0-13 per game in the province, but they shipped 4-17 to Tipperary come September.

Waterford have led at half-time in just nine of their 13 games in all competitions in 2015, they tallied a greater first half than second half total only six times, with 54 per cent of their championship scores arriving in the second period.

Regardless of how daunting their form may be though, Waterford know they’ll need to exploit every last opportunity that comes their way against Kilkenny – and if they harbour hopes of victory they will want to make a fast start.