GAA Statistics: Galway in search of that elusive third win in a row 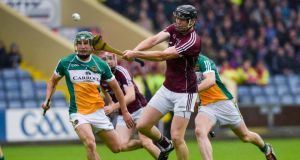 Galway have not won three competitive games in a row in almost four years. And that’s exactly what they’ll need to do if they are to beat Kilkenny this Sunday.

The Tribesmen have been the epitome of inconsistency in recent seasons. Two All-Ireland finals in 2012 and ’15 – with just two championship wins nestled between. Since claiming the Leinster championship in 2012, they’ve failed to put together three wins in a row in either league or championship.

Of this year’s Division 1A counties, they are the only one to fail to do so over that stretch. As for Kilkenny. Well, that’s why they’re Kilkenny – they find that surge of momentum each year. And that’s how winning is done.

Since beating Kilkenny in the Leinster decider four years ago, then beating Cork in the All-Ireland semi-final, before losing to the Cats in a reply in the final – Galway have only won two games in a row three times.

On two occasions their pursuit of three wins, and silverware, ended with defeat to Kilkenny in a final. The third occasion now comes against Kilkenny again. Of Kilkenny’s 36 wins over those four years, 70 per cent of them have come within winning runs of three or more games. And in four of the five competitions in which they have won three or more games in a row since 2012, they have ultimately won out that competition.

As for the three competitions that Kilkenny have not won since 2012 – in the 2013 championship Clare put together a five-game winning streak. In the 2015 league, Waterford enjoyed a seven-game winning run, as did Clare during this season’s league campaign. 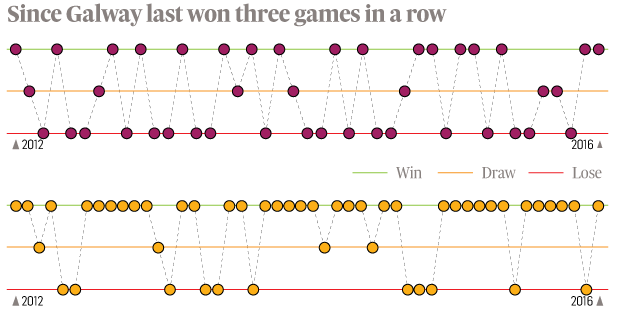 If Galway are the only Division 1A side to lack such consistency, how have they reached two of the last four finals? They can’t be that bad you say.

Under Anthony Cunningham’s tenure, Galway were a match for any team. In fact, while they have lacked that consistency and momentum to take that final step and claim silverware, they are actually the only team from hurling’s top tier in this year’s league not to have lost three or more games in a row since 2012.

During last year’s league campaign Kilkenny lost three games in a row – before bouncing back with six consecutive wins to maintain their league status and take provincial and national glory.

During the 2014 league, Waterford lost three games in a row and were ultimately relegated. In reaching the next two Division One finals, though, they put together winning runs of seven and three games.

Tipperary lost three games in a row with their final league game of 2013 and two subsequent championship losses. En route to their All-Ireland final replay defeat to Kilkenny in 2014 they managed four wins in a row and in the following league campaign (which also ended in defeat in the final) the reigning Munster champions enjoyed five successive wins.

Leinster champions in 2013, Dublin, had three consecutive wins during that year’s league campaign, doing likewise during this year’s league. In the 2014 league though they suffered three losses in a row.

Cork, of course, lost all five of their league games this year – before edging Galway in the relegation playoff. They won three in a row to take the Munster championship in 2014 though.

So this weekend Galway get a chance to secure that elusive third win; win their first encounter in seven games against Kilkenny; and claim silverware for the first time since July 2012.

The pressure is mounting. The players axed manager Cunningham in controversial circumstances during the off-season – a man who has won silverware everywhere he has gone.

Micheál Donoghue hasn’t had an easy start to his tenure with the team being relegated from the league. To their credit they bounced back with solid wins over Westmeath and Offaly so far in the championship - getting the job done with an average score of 2-25.

The question is - can they now surf on that momentum - or will Kilkenny deny them that third win and silverware, for the third time in a row?