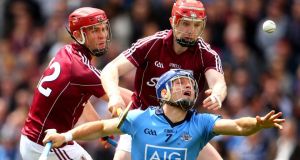 And considering his team’s record in Salthill, you can hardly blame him.

With Galway unable to play home games since they entered the Leinster championship in 2009, they have played 17 championship games in neutral venues, with another seven games at away venues.

By contrast, their opponents on Saturday, Dublin, have played eight games in neutral venues in the corresponding period, as well as another five away matches.

When you factor in league play-off games for both counties, Galway have won just 10 of their 24 games played in neutral venues, a 42 per cent success rate. Dublin, who are by no means prolific on neutral turf either, have a 50 per cent record in such matches. Considering the practice they’ve had, Galway should perhaps boast a better record.

Dublin are one of the sides with a poor home record; they have won only 14 of their 29 games between Croke Park and Parnell Park. 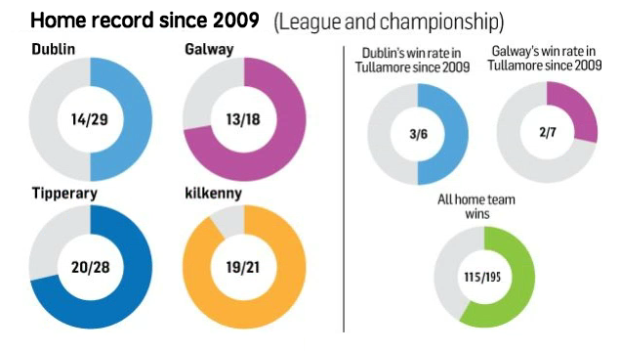 Dublin, though, have won nine of their 12 games played in Parnell Park since 2009, including their last seven games at the Donnycarney venue.

Their home record is dented by their Croke Park form; in those years they have won just five of their 16 games. Their Parnell Park win ratio is 75 per cent over those years, but drops to 31 per cent for their games in Croke Park.

Parnell Park is a small pitch, with the 141m x 82m dimensions suiting Dublin’s physicality. O’Connor Park in Tullamore is the venue this Saturday though, and is a much bigger pitch with dimensions of 145m x 90m.

Dublin have had mixed success in Tullamore. Ger Cunningham’s side have won half of their six games there since 2009. They’re two from two in their championship games during that period, beating Galway in 2011 and Laois in 2012.

Galway’s championship record in Tullamore has been exceptionally poor of late; they haven’t won in their previous four championship games in the Offaly county grounds.

Last summer their draw against Kilkenny was followed by a replay loss in the same venue. They were also beaten there by Dublin in 2011 and Kilkenny again in 2009.

Over the past five years Galway have won two league games and drawn one in Tullamore, while in the league Dublin have won one, drawn one and lost two. So overall, that’s a 50 per cent Dublin win rate in Tullamore, compared to a 29 percent rate for Galway since 2009.

Joe Canning will be integral once more this weekend, with Galway hoping last weekend’s draw will have settled him back into his flow following a layoff with a hand injury.

Despite only managing 0-1 via a sideline in last year’s replay loss to Kilkenny, Canning has proven that he can find his range in O’Connor Park with an average score of 0-8 in his previous four visits.

He has scored 3-9 from frees and penalties, 0-2 from 65s, 0-1 from a sideline and 2-4 from play, proving that he’s at ease with the various angles and distances which will again confront him on Saturday.

The last replay meeting between the two was a league relegation play-off victory for Galway in Portlaoise after the sides had drawn in Tullamore.

Should the venue have an impact this weekend, Dublin could have the advantage.