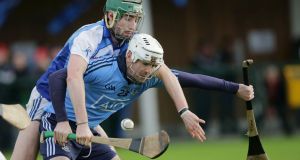 Ger Cunningham has described one-on-one penalty taking as the way forward after witnessing a little piece of hurling history unfold in the annual Dubs Stars challenge at Parnells club in Coolock.

The reduction of defenders on the goal line from three to one is in line with the new trial rule on penalty taking which will be used in the upcoming pre-season competitions.

Critics of the change believe goalkeepers will now have little chance of saving a well struck shot though Collins did get his hurley to Winters’ drive before seeing it deflect in.

They may be the first team to trial the new rule in competitive fare next Friday evening when they begin their Waterford Crystal Cup campaign.

“I think it’s worth a go,” said Dublin boss Cunningham of the trial. “Using it in the Walsh Cup and the Waterford Crystal competitions and as the year goes on, I think it’ll create a bit of atmosphere for the one on ones.

“I don’t think that the guys will score all the time, the goalie got his hurley to it today and could have blocked it. There’s a bit of pressure on the taker to score as well. So I think it’s going to add excitement to the whole thing.

“As the season goes on and people get used to the idea, there’ll be a bit of psychology involved for goalies and guys taking them. You’re still 21 yards out and you still have to strike the ball outside the 21-yard line. So it’s still a big challenge.”

Cunningham was happy with the low-key challenge tie despite the heavy defeat. He fielded a largely second-string side and used the opportunity to assess emerging talent. Winters finished with 1-4 for Dublin while teenager Fionn Ó Riain Broin from St Jude’s shot 2-5 for the club selection.

Ó Riain Broin delivered 1-3 of his tally in the first half and had three goal opportunities late in the game, the last of which he dispatched after a fine solo run.

Dublin rallied midway through the second half and reduced the arrears to three points at one stage. But the Dubs Stars’ second goal from Shane Stapleton put them in pole position again.

“We’re kind of all still feeling each other out,” said Cunningham of his new role in the capital. “They’re getting used to what I’m looking for and I’m getting used to their personalities. These matches are a great opportunity for us to get to know the lads.”

Gary Neville in Qatar an exercise in semi-journalism 01:03
Investment in our Olympic hopefuls may be costly – but it’s worth it 01:00
Leopardstown to continue watering and ensure ground is ‘fit for purpose’ 01:00
Mayo GAA county executive and fundraising body make peace 23:35
Jürgen Klopp insists Liverpool title party is not on his mind 22:30
Crossword Get access to over 6,000 interactive crosswords