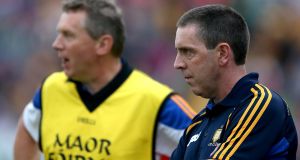 In the mid-winter frenzy that followed Clare’s 2013 All-Ireland win, Shane O’Donnell’s life was everyone’s but his own. Twenty minutes of hurling one Saturday night had made him the most famous teenager in the country. He got stopped for photos everywhere he went, nights out were a drag, his phone had smoke coming out of it. He couldn’t remember what normality was, never mind try to inhabit it.

Everyone and his mother wanted a piece of O’Donnell at the time, to the point where he didn’t want to leave the house and couldn’t face the thought of having to deal with people. But the one voice that pierced the babel belonged to Donal Moloney. They huddled in the corner of a hotel in Cork away from the noise and talked about life and hurling and everything and nothing.

The process of re-engaging with life as he knew it started there and then. “He’s more than just a hurling manager,” O’Donnell told The Irish Times when he recounted the story.

Moloney and Gerry O’Connor have had countless conversations like that with the Clare players over the past decade. Some of them, like Conor McGrath, Conor Ryan, Pat O’Connor, they’ve had under their wing since they were 13. They’ve watched them grow into men, decide on where their lives would go outside of hurling and find their way in the game all the while. And now they get the chance to cherry the cake and manage them at senior level.

“The emphasis will change,” says O’Connor, “but the processes won’t. You are still going to have the regular one-on-one conversations with them to know what’s going on in their lives and in their minds.

“There’s no point just asking the question. You have to be a mentor to these people. That’s how we are at work, that’s how we are with players. It’s constant questioning and mentoring and talking and finding out what’s going on in these people’s lives.”

O’Connor and Moloney both say they split the job between them because it’s the only way they’d have time to do it.

Both work for companies who export most of their products to the global market so it’s no big deal for their employers to have the county manager working among them. “My boss is Canadian,” laughs O’Connor. “We’re not driving around in a company car with a logo on the side.”

So they do it together, as they’ve done it together since O’Connor brought Moloney in to help him with the county under-16s back in 2007. They actually went to the same school as kids but didn’t come across each other for the guts of 20 years after leaving. Together, they’ve wet-nursed a gilded generation of Clare hurlers through their teens and young adulthood. They racked up underage trophies at an unprecedented rate, crowned by a trio of All-Ireland under-21 titles. Throughout, developing people meant as much to them as developing hurlers.

“Normally, you would have a spike in performance in March, April, May – that would be the normal lifespan of a Clare minor hurler. But these guys, over a five-year period were training with us almost all year round. What that creates is very hard to quantify in words. It goes beyond a bond and a spirit really.

“When you have these guys for that length of time, you’re basically hijacking them from their parents almost. It was easier for us to make a connection with them than for a senior manager because we were able to be there when they were wondering about what colleges to go to, what careers to pursue, all that side of it.

So now they take the next jump together, all of them. Clare are the great unknown known of the hurling landscape. Everyone can see what they have, nobody can quite make out why they don’t have it when it matters. To O’Connor and Moloney falls the job of extracting their best and eliminating their worst.

“We’re under no illusions what we are getting ourselves into. Anyone watching the All-Ireland semi-finals and final can see where the standard has risen to. It’s quite clear who the best four teams are and it’s quite clear what the deficit is between Clare and those teams.

“We would like to think that we think a lot about the game and if you were to be really honest, the significant difference between senior and under-21 is the raw physicality and intensity and ferocity of play.”