Antrim overpowered in under-21 decider at Semple Stadium 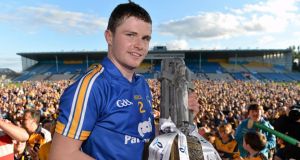 Clare captain Paul Flanagan with the trophy after their victory over Antrim in the All-Ireland under-21 hurling final at Semple Stadium. Photograph: Brendan Moran /Sportsfile

Clare 2-28 Antrim 0-12: It wasn’t the complete landslide that was predicted, it was worse, Clare having to hold themselves back in the end to prevent an utter annihilation of Antrim when winning the All-Ireland under-21 hurling title at Semple Stadium.

In claiming a third such title in five years Clare underlined their blossoming of hurling talent although this time it was no contest, the Ulster champions simply unable to repeat their semi-final performance, when they took out Wexford.

Indeed in the opening 30-minute half alone, Clare spread their scoring among seven players – Cathal O’Connell leading with way with 0-8 (seven frees), with Davy O’Halloran hitting 1-1, Shane O’Donnell 1-0, Tony Kelly, Cathal Malone and Colm Galvin 0-2 each, and Seadna Morey with 0-1.

So, leading by 18 points at the break, 2-16 to 0-4, it wasn’t just a case of game over at half-time, but what Antrim could possibly salvage from the game in the second half.

Nothing, as it turned out. Instead, Clare knowing their work was done, and conscious of the All-Ireland senior replay against Cork on Sunday week, called ashore, all within seven minutes of the second half, Tony Kelly, David McInerney, Colm Galvin, and Padraic Collins, all four being senior stars on Davy Fitzgerald’s panel.

All that was left then was for time to run down, Ciaran Clarke’s free keeping something ticking over for Antrim, while Clare eased up with comfort of a team in sweet, joyous control of where they’re at.

Cathal O’Connell is worthy of the last word, however, with his grand total of 0-12 – before the team was duly swarmed by the Clare supporters.

1 Gordon D’Arcy: There’s more to Saracens’ success than money
2 Aston Villa strike at the death to pull clear of the drop zone
3 Solskjær can’t guarantee Rashford will play again this season
4 O’Donoghue says Limerick will let their hurling talk in 2020
5 Rowe and Dublin ready to get back down to business
Real news has value SUBSCRIBE

Rowe and Dublin ready to get back down to business 06:00
Gordon D’Arcy: There’s more to Saracens’ success than money 06:00
Honeysuckle facing ‘different ball game’ in Irish Champion Hurdle 01:03
Funding row just ‘background noise’ for Mayo’s Diarmuid O’Connor 01:00
O’Leary team say too much watering better than too little at Leopardstown 01:00
Crossword Get access to over 6,000 interactive crosswords