Clare no barrier to Laois advancement

Mick O’Dwyer calls it a day after landslide defeat 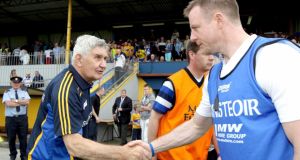 The second game in the double-header at Cusack Park on Saturday proved to be a one-sided affair like the opener. But on this occasion it was the Laois footballers who issued a drubbing to the home side. Clare’s veteran manager Mick O’Dwyer stepped down the aftermath of the defeat.

Justin McNulty’s men were clinical in brushing Clare aside with ease after they were slow to get off the mark in the opening 25 minutes. By this stage, they trailed by 0-6 to 0-2 but between the 27th minute and half-time, the O’Moore county scored 1-5 to no reply and to all intents and purposes overwhelmed O’Dwyer’s charges. Team captain John O’Loughlin grabbed his side’s first goal.

Over as a contest
Clare got their seventh score, a point by Graham Kelly on 25 minutes but didn’t register anything else on the scoreboard until 18 minutes into the second half. By this stage this game was over as a contest, as Laois ran riot, leading by 2-12 to 0-7.

Corner-forward David Conway was in for a second Laois goal, three minutes after the restart as Clare appeared to be still reeling from the late first-half onslaught applied by the visitors.

Jack Grealish needs to show that his remorse is real this time 12:13
Tottenham give 550 non-playing staff a 20 per cent pay cut 12:14
Sky Sports customers save on bills; rule changes could change rugby utterly 07:25
Uefa meet to re-evaluate hopes of finishing current season 06:48
Gerry Thornley: Changes to tackle laws could transform rugby by time of next World Cup 07:18
Crossword Get access to over 6,000 interactive crosswords