Ger Cunningham could be named as Dublin manager this week 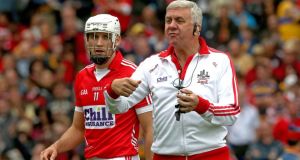 Ger Cunningham: former goalkeeper was a selector and then trainer for Cork in 2012 and 2013. Photograph: Ryan Byrne/Inpho

Ger Cunningham could be named the new Dublin hurling manager this week. The former Cork goalkeeper and trainer until last year, could go before the clubs for ratification in the coming days.

Anthony Daly’s six seasons in charge ended in a comprehensive defeat to Tipperary in Thurles this summer. That was following the high water mark of clinching the Leinster title last season and narrowly losing to Cork in an All-Ireland semi-final.

Injuries and an inability to rediscover their 2013 form saw a significant dip in performance during Daly’s final campaign in charge.

Shay Boland has been mentioned as the only potential native successor to Daly with another Cork man, John Allen, believed to be a favourite among the Dublin panel, following recent success as Limerick manager.

A three time All-Ireland winner, Cunningham would be a candidate for the Cork hurling post if Jimmy Barry-Murphy doesn’t seek a third year at the helm. However, Barry-Murphy is expected to return in 2015.

Playing for Cork between 1981 and 1999 (playing 50 consecutive championship matches), Cunningham has few peers in the game, having won four All Stars and seven Munster championship titles.

From 2003 and 2006 he was goalkeeping coach under the managerial reign of Donal O’Grady and then Allen. He wasn’t interviewed for the position before Gerald McCarthy’s subsequent appointment.

After a one season spell in charge of Waterford club Ballygunner, when they won the county title, Cunningham returned as selector then trainer of Cork in 2012 and 2013.

The Dublin county board were unavailable for comment last night.

“We needed someone who had won All-Irelands,” said Dublin forward Danny Sutcliffe earlier this week in the context of so many Dublin’s most talented young hurlers being swayed by the football structures.

“We’re losing enough as it is, but it could be an option there. What a great set-up it is, look at the manager they have: it’s a pull factor for the kids - the lads coming through who are now 15, 16, that we could be playing within two or three years.

“And if that’s not there, sure why would you go play when you’ve Jim Gavin with the football winning you All-Irelands? So it’s huge for younger lads coming through. You have to be able to sell it to them, because some lads are that good, like Cormac Costello, who can just go ‘I’ll pick either-or’.”

They did, however, recover to beat Offaly before Sligo removed them from the qualifiers in round two.

“We had a number of applications but were very impressed with Johnny’s presentation,” said Wicklow secretary Michael Murphy. “He had an added advantage of being here last year but what impressed us was his proposals centred around how he wants to leave Wicklow football after his tenure is complete.”

Magee’s backroom team has yet to be confirmed and there will be a clause in place to review his position at the end of each season.

The Offaly, Louth and Westmeath football managerial positions have yet to be filled.

The Westmeath executive met last night with John Cooney, a selector under Paidí Ó Sé when the county won their only Leinster title in 2003, favourite to be ratified. Séamus McEnaney was another candidate for the role.

1 Australian rugby staring into abyss as another crisis hits
2 Six Nations rugby needs to be protected for terrestrial TV
3 My favourite sporting moment: Game, set and couch as Borg takes down McEnroe
4 Garry Ringrose to stay with Leinster as he signs two-year central contract
5 Dr Claire Molloy: ‘It is a privileged place to be, on the frontline’
Real news has value SUBSCRIBE