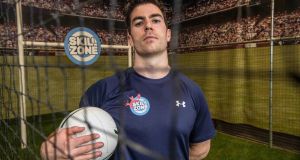 Michael Darragh MacAuley: “I nearly feel a bit guilty because the lads worked their socks off all year and I only scraped in to rob a medal.” Photograph: Morgan Treacy/Inpho

If it ain’t broke, fix it and make it better, as basketball coach Phil Jackson once said and which Michael Darragh MacAuley reckons could be the secret to Dublin winning back-to-back football All-Irelands.

MacAuley, the 2013 Footballer of the Year, admits to constantly reinventing his own game, including his preparations off the field. He recently returned to his first love, basketball, after helping Ballyboden St Enda’s land a first club All-Ireland, and returned to the Dublin panel just in time to make a second-half appearance in their Allianz League title last month.

“Yeah, I think you’re always doing something different,” says MacAuley. “I’m always trying the latest fitness thing, latest weights thing. There is a point where you can almost get obsessed by that, but I don’t think I am. I’m always open to finding something fresh.”

“When Paul Caffrey came in, that Dublin team really hit the weights hard, they were big units. I remember I had just started training with the Ballyboden senior team and Collie Moran and Conal Keaney were on that team at the time. They came back in, had doubled in size, were swatting lads away,” he says.

For MacAuley, speaking at the opening of the Skill Zone multi-sport indoor facility in Stillorgan, returning to basketball also helped freshen him up for the championship, which for Dublin begins on Saturday week against Laois in Nowlan Park.

“Going back playing basketball was huge. I managed to get back for a few weeks and felt so fresh afterwards. It was mostly short sprints and I really enjoyed it. I was a bit nervous. It was a few years since I was back dribbling on the hard wood, but it went well, and hopefully I can get back in the off season as well,” he says.

“I was only kind of scraping my way back for the final. I nearly feel a bit guilty because the lads have been working their socks off all year and I only scraped in to rob a medal. I wasn’t sure Jim was going to play me. I had no part in the league, so I thought he might have just stuck to what he had and then let me come back in at the start of the championship or whenever instead.”

“I’m looking forward to doing that. Jim’s not stupid. Jim doesn’t really go on what has been. He’s going to look forward and see how he can make the team better and if I’m playing well enough, I’m going to play in the team. If I’m not, I won’t and that applies to everyone.”