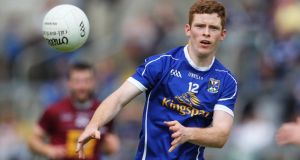 Cavan 0-17 Laois 2-6 When these two sides last met in Portlaoise in 2000, the visitors scored a comfortable nine-point victory and on Saturday night had the Cavan forwards not wasted several opportunities in the opening half then they might have surpassed that margin of victory.

In the opening round Cavan snatched a share of the points with Roscommon but Laois suffered an away defeat to Westmeath and after another set back look destined for a return to Division three.

Laois got a dream start when a long ball broke in the square and Donie Kingston rose highest to punch to the Cavan net after three minutes.

Laois did respond with a brace before Damien O’Reilly landed his second point five minutes before the break but Laois stung the visitors when Donie Kingston hammered home his second goal. Then on the call of half-time Martin Reilly kicked his side’s ninth point leaving the scores all square.

Laois looked better team in the opening minutes of the second half scoring the first two points but that was as good as it got and the visitors turned up the heat as fog descended on the pitch and Cavan struck eight points in a row including three second-half substitutes.

The visitors went home happy and looking forward to a visit from Down but Laois manager Tomás Ó Flatharta will hardly relish his trip to former charges Galway in Salthill on Sunday week.