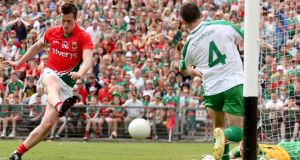 Donal Vaughan and Cillian O’Connor have both returned to the Mayo starting line-up for Sunday’s All-Ireland quarter-final against defending champions Donegal, the side that beat them in the final last September.

Vaughan, who made an appearance off the bench in the Connacht final win over London, slots straight back in at centre half back with Keith Higgins, his deputy in Castlebar, moving to his accustomed full back role.

Darren Coen, given his first start against London, makes way for O’Connor in the full forward line. O’Connor was introduced at half-time in Castlebar and celebrated his return from a shoulder injury by grabbing himself a hat-trick of goals in the 35 minutes he was on the pitch.

After that game, the Ballintubber man spoke of his relief to be back playing championship football following a dislocated shoulder that had threatened to end his championship.

“It’s always great to get back on the field after the injury lay-off,” he said at the time. “It’s hard watching the boys train and play, and not being able to do anything. But I feel now that the shoulder is 100 per cent again.”