Unravelling the threads of the champions’ league 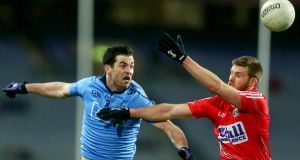 Jim Gavin was of course right earlier this week: it is all about championship ultimately but that’s not to say that teams can’t get valuable data from how they perform during the league. Unfortunately, sometimes the implication of that data isn’t entirely clear until later in the year and that applies to defending All-Ireland champions more than anyone.

At the moment the jury is out on Dublin. The county has a great depth of playing talent although like any other side, won’t find it easy to replace key personnel.

Cork have a good record against Dublin in the league and, under new management with a largely overhauled young team, arrived in Croke Park in upbeat form. Brian Cuthbert’s selection looked strong although Michael Shields and Paddy Kelly were injured. Colm O’Neill was named on the bench before coming on to make a critical difference to the match in his first serious match since recovering from a third cruciate injury.

Still this was a match in which to lay down markers and after a terrific contest, it was there to be won in the final minutes. Failure to do so was a disappointment for Gavin, as it was further evidence that the team isn’t moving with the elan of 12 months ago.

The ambiguity in Dublin’s narrow defeat lies in their list of absentees, half of the All-Ireland final team, including three current All Stars and, significantly in circumstances where poor shooting sank them, four of the six starting forwards.

There’s also the evidence that in the modern, qualifier era, teams winning the All-Ireland in September take the foot off the pedal during the following season’s league.

Only Cork in 2011 actually won the title in the year of an All-Ireland defence – the last time prior to the weekend that they had beaten Dublin in Croke Park – as opposed to half of the champions during that time having won the league the previous spring and gone on to complete the double. League success is a strong marker of a team on the rise but less so of a team at the top.


High intensity
League performance can also however be a sign of what’s to come. After two strong seasons in 2010 and ’11, Dublin in Pat Gilroy’s final league campaign were lacklustre and that 2012 precedent might concern his successor because performances to date have been flatter than last year with the two wins coming against Kerry and Westmeath, the bottom teams in the division.

Gilroy put his finger on it two years ago when he said that unless Dublin played with a high intensity they were just another team.

Results in the spring can also be indicative. In the years since returning to Division One of the league in 2008, Dublin have lost to or failed to beat the team that eventually eliminated them from the championship: Kerry in 2009, Cork in ’10 and Mayo in ’12.

Gavin has said of the current season that he’s happy with progress in that plenty of chances have been created even if not enough of them were converted but the team needs to raise its performance levels and accumulate more points if the league is to be put to its best use: not necessarily winning it but establishing a consistent level and identifying a number of new players who are live championship options because, as Donegal discovered last year and others before them, defending champions ideally should have refreshed their first team.

Accepting the Philips Manager of the Year award last December, Gavin made an interesting speech, saying that the most treasured moments of the 2013 championship were those in the dressingroom immediately after winning the All-Ireland.

You can only step in the same river once and it’s hard for an All-Ireland winning group to remain unchanged in the year that follows. As Gavin explained, players get injured or lose form and backroom people move on but for whatever reason it’s not going to be the same.

Most of all though, managers find it difficult to maintain the edge that distinguished a team in a successful season.

This has already happened to Dublin after 2011 and the hopes for this year are partly based on that experience and the lessons learned.


Summarised
Kieran McGeeney, when in charge of Kildare, cleverly summarised the league as a process of finding out what players have got: “You try and make it important for them.”

In the Dublin camp it won’t be too difficult to emphasise the importance of this campaign. They saw first-hand that Cork’s challenge has been reinvigorated and on the last day of the regulation season they’ll be up against a rapidly improving Tyrone.

If the increasingly rare feat of retaining the All-Ireland is to be achieved, the coming weeks will hold vital clues.