Tyrone’s Mattie McGleenan has Scotstown on an upward curve 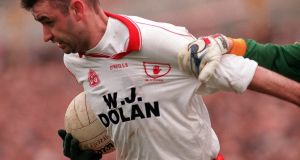 The former Tyrone man Mattie McGleenan has been the key to Scotstown’s rise. Photo: Inpho

Tribalism may be the heartbeat of the GAA but it is often forgotten that at the intricate level of clubs and parishes, outside influences can be profound. Take the recent Monaghan senior club final featuring Scotstown and Monaghan Harps.

Scotstown, nascent giants of the Farney game, were managed by Mattie McGleenan, the former Tyrone forward. But Harps, the townie’s townie club seeking a first O’Duffy cup since 1923, were guided from junior to senior level by McGleenan some seven years ago.

They met more than their match in Scotstown, who gave a master class of finishing in a 2-12 to 0-9 win, but McGleenan sounded proud of his former charges when he spoke of them.

“They have put a huge amount of work into that group. This isn’t a one-off thing from Harps. They have started to kick down the door of senior football.”

On Sunday, Scotstown will play against Slaughtneil, the Derry and reigning Ulster champions. McGleenan has blurry memories of playing for Eglish against Lavey, the representatives from the Oak Leaf County for the 1990 version of the Ulster club championship. Lavey prevailed and then took the province.

He runs through the staggering list of big-striding clubs from south Derry, from Loup to Dungiven to Bellaghy to Ballinderry to the current holders. Flickering as the Derry county team has been in recent decades, their clubs tend to come with a winter roar.

When McGleenan guided Scotstown to its first county title in 19 years in 2013, a quarter-final against Ballinderry was the prize. It was all new to them and fabulous and they didn’t feel so bad about being narrowly beaten. This time, it is different.

“To play against the top team from another county: it is not a parochial thing and you don’t meet every year. So unless we play Ballinderry in a challenge, there is no guarantee we will meet for a while.

“So the Ulster championship is an opportunity to go and see how good you are. The first year was a voyage into the unknown for the club because it was such a long time since we had won a county title. But then Clontibret beat us by a point in the final last year. You don’t realise what you have until it is gone. And once the final whistle went we realised we had made mistakes and allowed things to slip in terms of standards we had set. And the following Thursday after that final we made a statement that we would come back and make sure and get O’Duffy back to Scotstown.

“So this year was about addressing the wrongs. It was a case of: let’s look at what we didn’t do well. It was a self analysis of our season. Championships aren’t just won on the day. They are won on the preparation up to that point.”

In the minutes after Scotstown won that final in 2013 – the first since 1993 – McGleenan cheerfully confessed on television that the idea to put Kieran Hughes, Scotstown’s totemic full-forward, marking Clontibret sharp shooter Conor McManus belonged to his 11-year-old son, Michael, who casually mentioned it in the car.

McManus had taken Scotstown for 1-8 earlier that season and posed a serious problem.

McGleenan thought about it and felt it could work. It did. McManus was held to 0-2. The Eglish man is serious about football and about winning without losing sight of the bigger picture. He admits to having no time for the fashionable projection of the Gaelic football lifestyle as an exercise in joylessness.

“When you see Scotstown on Sunday night – and strangely, I saw a YouTube of Trillick after they won their first Tyrone championship since 1987; when you see what it means to a parish . . . You can’t buy that enthusiasm and confidence and enjoyment.

“I came out of Scotstown about one o’clock on Sunday night and there was about 10 children sitting by a bonfire outside McMahon’s shop there in Monaghan town. It was a fabulous picture that will remain with me.

“They were sitting there warming themselves, having a good time, all wearing their Scotstown jerseys and they weren’t up to any mischief.

“They were just enjoying the feelgood aspect of what their players had done for the community. So it is easy to say, oh there is so much commitment required now and that. But when you see the celebrations and what it means, it is a fantastic thing to be involved in.”

Tyrone comparisons pepper McGleenan’s conversation. It is inevitable. He is, first and last, a Tyrone man. But his respect and affection for Monaghan football is clear.

He served as a county minor selector and coach and has come to know the culture and traditions of the game through his involvement with the clubs. And he feels certain that Monaghan’s revival as an Ulster championship force has acted like an elixir throughout the county. The place is buzzing.

“Monaghan went to the semi-final of the league last year. That is not achieved by chance. Tyrone went down last year. But if everyone gauges success by cups, that is a very shallow method. Malachy O’Rourke is getting the very best out of the players at his disposal. That is a serious achievement in itself. They were unlucky to meet Tyrone in the quarter-finals.

“But they are super fellas to work with in terms of character, the likes of Conor McManus and the Wylie brothers: these are great drivers of Gaelic games and they wear their hearts on their sleeve.”

McGleenan played on the 1995 Tyrone team that lost the All-Ireland final to Dublin. The county would wait for another eight years before it made its September mark but since then, their influence has been profound.

McGleenan feels that Dublin are the current benchmark and he hopes that other counties will try to aspire to what they have achieved rather than play a game of containment, a style of which he has never been a fan.

“I wouldn’t be a great advocate of 15 men inside the 50. I would not. I don’t think that is of any benefit to the game.

“Dublin, I felt, have played a great brand of football and they had had to adapt to an extent. But some of the skills in evidence in terms of scoring and kick passing and movement and handpassing . . . all that stuff can be coached.

“You can accept that challenge and try and meet the standard or you go 15 behind the ball and you become athletes. Your county almost dictates the style that a club will play. It has bits and pieces but in Monaghan they have a great attitude of coming out and playing football and just going at each other.”

That is how he hopes Sunday’s game will go. Last week, Scotstown had a run out in Clones, host venue for the game.

“It’s only when you sit in those dressing rooms that you realise the number of players within Ulster who sat there. And it is exciting. We haven’t won a championship match in Ulster yet. So our goal is set on that. That is where it is at.

“Slaughtneil got a good game against Derrygonnelly and went about their business really well. Now we are facing another Derry team with All-Ireland club experience. This is a chance for us to play on a bigger stage. If you can’t play in Clones, you better get back and start practising.”