Tyrone confirm the likely return of Cathal McCarron to panel 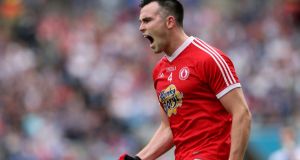 Former Tyrone and London footballer Cathal McCarron looks set to rejoin his home county’s panel within the next three weeks.

The Tyrone senior set-up have confirmed in a dual statement with the GPA this morning that the 26-year-old corner back is “currently working on his personal fitness under a strength and conditioning coach. This is with a view to returning to full training with the Tyrone squad when they regroup next month.”

McCarron joined up with the London senior football team last year, following a string of off-the-field issues which led to his departure.

Only a year previously he had been nominated as an All Star following some outstanding performances in reaching the All-Ireland semi-final as a key component of Mickey Harte’s team.

In their statement on behalf of McCarron and the Tyrone senior football management this morning, the GPA conveyed their hope that the player will receive the necessary space from the public eye in completing his road to recovery.

“While conveying this positive news we would like to point out that Cathal will not be engaging with media in any capacity for the foreseeable future.

“On behalf of Cathal, the Tyrone squad and management, the GPA would kindly ask you to respect that Cathal needs to focus on his recovery and his return to football.”