The very best sides know the value of marginal gains 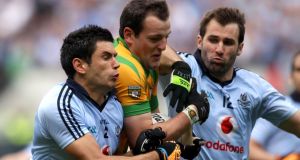 We all have our preferences for watching big games – our seats, our pre-match routines, and our preferred viewing partners. Your dad might drive you demented, your friends or partners might not care enough (“why are you so upset, it’s only a game” can induce a burst blood vessel if uttered in the wrong company), and of course a companion’s incomplete knowledge of the Treoir Oifigiúil means you can spend a little too much of the game explaining, and not enough time sharing cheap, ill-formed opinions – the basic human right (to steal a Paul Grimley phrase) of every GAA fan.

Then of course there are the times when the companions themselves can be the distraction. I watched the 2005 Leinster hurling final in the company of American film director Paul Schrader, who was over for the Galway Film Fleadh and expressed an interest in taking in a game. My brother knew the organisers involved, they got on to me for a ticket, and suddenly there we were, the creator of Travis Bickle, his teenage son and I, watching Kilkenny and Wexford. I could’ve asked him why he kept stealing bits from the films of Robert Bresson, but to be honest, I was just hoping Wexford would keep the score down.

For years, my brother Paul and I have ended up at games together, and so it was on Saturday evening when we headed up to Croke Park for the football quarter-finals double-header. At the end of the Dubs’ merciless defenestration of Monaghan he turned to me and said – “Dublin won this game for the best reason, the most equitable reason there is. They just have much better players.”

For years this has been the key deciding factor in GAA games. Most years Cork, Kilkenny and Tipperary had better hurlers, and they’ve won 88 All-Irelands between them. Kerry are brilliant most of the time, and when Kerry aren’t brilliant, but there are no other great teams around, they’re usually good enough to win a few All-Irelands that way too. Dublin have 24 wins and counting.

This was great news if you happened to be from any of those five counties. It seemed like a very fair way of deciding winners and losers. But eventually the other 27 counties were going to get sick and tired of waiting for the (often quite literally) once-in-a-lifetime confluence of events that creates a county team capable of winning on its own merits.

People will look at this stage in the development of football and say that it was defined by the ‘blanket defence’. But really what these last few years have been about is a refusal by counties to accept their natural position. All things being equal, Kerry and Dublin should win the All-Ireland most years. They’re two of the last four left this year, after all. But the quality of players available to you is not the only thing that can define where you stand in the pecking order. You can be fitter – and many teams have based their success on that down through the years. You can be smarter. And you can be better coached.

Dave Brailsford, the man previously in charge of British Olympic track cycling and now head of the Team Sky professional bike-riding team, became associated with the idea of ‘marginal gains’ – that if you improve everything by one per cent, all those tiny changes would add up to a huge overall jump in standards. If that’s the case in Olympic-level or professional sport, then it must also be the case, to an even greater extent, in amateur sports.

What we saw on Saturday, and what we’ve seen for the past two years, is Dublin taking up that challenge. They have a team full of excellent individuals capable of winning on their own merit . . . but now they are fitter, better coached, AND have the best players. So like Kilkenny in the last 15 years, they have moved it on. The challenge changes again for the other counties out there.

My brother Paul and I were at the 2011 All-Ireland semi-final between Dublin and Donegal and disagreed that day. I found it grimly fascinating, one of the most extraordinary occasions I’d ever seen in Croke Park. . . and he . . . well, he thought what you thought. The weekend just gone has given the country a chance to see how both those sides, who have shared the three All-Ireland titles since that game, have progressed. Jim McGuinness’s side have a chance to strike a blow for the underdog again. Donegal, the people’s champion? You don’t think that way about them, but you should.