The days when Dublin went seven years without a Leinster title 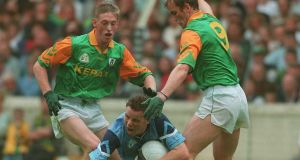 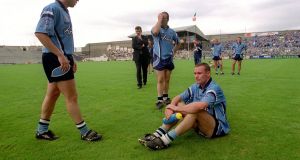 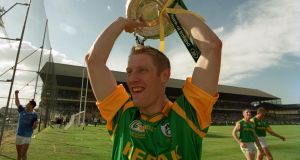 On this weekend 20 years ago, the world may as well have been square. Dublin went into a Leinster semi-final as defending All-Ireland champions alright but after that, the comparison starts to get a bit raggedy. They played Louth in Navan and just about kept air in their lungs.

Louth missed an open goal in the second half and coughed up Dublin’s only green flag five minutes from time when their goalkeeper and full-back collided to leave Joe McNally with a simple tap-in. Dublin got out the gap by four points.

And do you know what? It caused barely a stir. The Dubs were deemed to have been lucky enough not to have to pay for an off-day but it was seen as just one of those things that can happen. Championship football, that’s all. No biggie.

Nobody knew it that day walking out of Páirc Tailteann but Dublin were about to tumble into the sort of abyss that would be unimaginable today. It would take a full three years until they next saw a championship victory. The team that had won four Leinster titles in a row and topped it off with an All-Ireland got such a thorough rinsing out that only four survivors remained by the time they next won a Leinster game in 1999.

It seems almost deranged to detail it now but Dublin went seven years without a Leinster title. In the nine seasons after their All-Ireland, they were one of six different counties to lift the Delaney Cup.

They lost to Meath four times in a row, to Kildare twice after replays, to Laois and Westmeath even after they’d broken the spell in 2002. If you tried to convince a 10-year-old of it now, they’d demand you crack open the wallet and tell them the one about the tooth fairy again. If Ciarán Whelan thought he was coming in to ride sidecar in the most smoothly-purring engine in the championship, he soon found different. He didn’t win a game for three years, by which time he was being leaned on as one of a transitioning side’s few reliable totems.

The world was different then and Dublin were just another team – some years good, some years not so good. Part of the peloton and not a penny more.

“I would have stood on Hill 16 through those games in the early ’90s and although Dublin dominated and won four in a row, it wasn’t a case of them hammering everything in sight,” Whelan says. “There were one-point games, two-point games, replays, full-blooded games all the way. The dynamic changed in 1996 as that Dublin team came to the end of the road and started to go into transition and Seán Boylan brought another Meath team through.

“I certainly went into that panel in 1996 thinking this was a special opportunity. But obviously with a change of management and a team that were All-Ireland champions, sometimes that’s not a good combination. The writing was on the wall in ’96 and Dublin had to go through a rebuilding period. It took us seven years and that period coincided with a new Meath team and the best Kildare team in a long time. We were the poor relations in Leinster at the time.”

To look back at it now is to enter a world that could almost be in black and white. Seething epics of games as early as mid-June. The Dubs played Meath  on June 15th 1997 in front of 67,000 in Croke Park, a game that went right down to the final kick of the ball. Paul Bealin missed a penalty with said kick and that was it – Dublin were done for the summer.

“I think the whole system is a disaster,” fumed Dublin midfielder Brian Stynes afterwards. “There are 60, 000 people there and they saw one of the best games of the year. And that’s it for 12 months. One of the best teams in the country gone for 12 months. It’s a joke. They should get their heads out of their arses.”

Whelan is no misty-eyed nostalgia merchant but equally there’s no denying in the search for a culprit in the matter of the Leinster Championship’s decline, the qualifier system must be called in for questioning.

“It was a totally different dynamic back then. I struggle actually to get my head around it these days sometimes. Dublin versus Meath back then was one of the events of the year. You were guaranteed a full house in Croke Park – I don’t think I ever played Meath in those days where the crowd was below 60-70,000.

“Obviously the back door wasn’t there at the time. Getting out of Leinster was the hardest part of the season, we always felt. Because it was so competitive, whoever got out of Leinster had a really good chance of winning an All-Ireland because you’d arrive at the semi-final stage with serious momentum. Nowadays, you know you’re going to make the last eight anyway and you take it from there. So the significance of the battle in Leinster is gone.”

Ain’t that the truth. The numbers are well worn by this stage but there’s no harm in holding them up to the light again. Dublin have lost one game in 10 years in Leinster. Their last nine games in the province have all ended with double-digit beatings. Their average winning margin has risen each year since 2011 (4) to last year (19.66).

Contrast that with days when Whelan had to endure Meath’s biggest win over Dublin for 35 years (1999) and Kildare’s biggest for 31 years (2000). The notion that the championship would get to where it is today just never entered their heads. “I genuinely don’t think we could ever have imagined this. Certainly not in those days. If we were truthful with each other at the time, we would have said we just weren’t good enough. We didn’t have the forward line to really be successful and it wasn’t as if Dublin were streaming out minors or under-21s to improve things. There was no underage success at that stage. It was a fairly barren period.

“If you had said to me back then what it would become, I’d have laughed at you. If you even had said it 10 years ago that Dublin would be in such a dominant place, I would have had a hard time believing it. I just wouldn’t have foreseen that. There was a long road to travel, to my mind, just to win a Leinster title. Never mind anything more than that.”

Everyone knows the reasons. Population, finance, development squads, expertly-tended gardens in the city. Success breeding success. A special team with a brilliant manager guiding them. Whelan is dubious as to the depth or quality of the next generation and notes the success of Kildare and Meath at underage as straws in the wind. But though he’s sure the wheel will turn at some point, he takes less and less pleasure out of this stage each year.

“In some ways, I see it as a bit sad. It’s sad that it took Ireland qualifying for the next round of the Euros to generate a bit of interest in a Dublin Leinster championship match. I had a lot of people say to me, ‘Jaysus, I didn’t even know the Dubs were playing on Sunday’. And I’m going, ‘They’re playing Meath, like!’ I would see that as something fairly significant. But unfortunately that’s the way it’s gone.

“I know a lot of it is to do with Meath having fallen back a lot. If you look at them over the last 10 years, they had a lot of managerial problems, county board problems and all that. And as much as that’s been good for Dublin, it’s sad to see it go that way. Every year that passes, that Dublin-Meath rivalry gets diluted a bit more. Kids nowadays wouldn’t see that it was ever a big thing.

“I think the GAA are ignoring the fact that June and July football is not attracting the neutral punter and it’s not engaging kids. I have a 10-year-old at home who told me he didn’t want to go to Croke Park on Sunday. Now, I know the Ireland game is a huge factor but the truth is, he’s not that bothered about Dublin until they get to the quarter-final or semi-final. Like that’s great from a Dublin perspective because it’s a sign of success but it’s disappointing overall.”

Time and tides tell us this will end. Who knows what the world will look like by then?