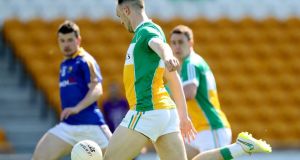 Nine years is a too long for any county to wait for a win in the Leinster championship, and Offaly won this game with exactly that in mind. It wasn’t easy or always comfortable but their desire to end that long wait was evident throughout, and in the end simply too much for Longford to handle.

So, nine years after beating Carlow in the 2007, Offaly will now face Westmeath, in Mullingar, on June 12th, that game to decide who goes on to the Leinster semi-final - in the opposite side of All-Ireland champions Dublin.

Even with home advantage, and the reminder that Longford took them out at the same stage last year, Offaly started nervously, gifting their opponents a goal after just six minutes: goalkeeper and captain Alan Mulhall completely misjudged the seemingly harmless shot of Barry McKeon, only instead of it dropped short and into the hands of Mulhall, it bounced marginally over his head and dropped into the Offaly gaol.

Naturally and rightly spooked, Offaly promptly gathered their thoughts and very soon hit back just four minutes later - a neat one-two between Joey O’Connor and Graham Guilfoyle ending with Guilfoyle sweetly placed shot into the right corner of the Longford net, putting them a point up, 1-3 to 1-2.

It was an impressive recovery, yet surprisingly short lived: Longford hit back again with a string of points, Robbie Smyth hitting two in quick succession, and suddenly Offaly were chasing their game again, two points down.

They were struggling a little around midfield, especially with their own kicks; then Brian Kavanagh missed a handy free for Longford, dropped his next shot short, and just as suddenly as they’d gained a grip on the game they lost it.

Without warning Offaly found a new gear, running repeatedly and bravely at their opponents and getting their reward too - eight points without reply, to be exact, before half-time, including Niall McNamee’s wonderful run from his own midfield before deftly finished his shot between the posts. Nigel Dunne and Bernard Allen were equally clinical with their chances and just like that Offaly had found a tidy surfeit, going into the break 1-12 to 1-6 in front.

Offaly immediately picked up where they left off, and even though Longford eventually ended their 28-minute scoring famine, Brian Kavanagh’s missed penalty quickly soon after put a stop to any threat of a comeback.

Instead, Offaly hit their second goal through Niall Smyth, nearly set up by Guilfoyle, to put them safely clear, 2-16 to 1-10. There was time for a late consolation goal for Robbie Smyth, but by then Offaly weren’t about to wait 10 years for a first win in Leinster. No way.