Offaly back up and running after victory over Waterford

A first championship win in four years for the Faithful County 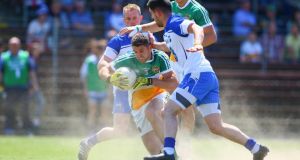 A first Championship win in four years kept Offaly’s summer alive at a sun-soaked Fraher Field, while Waterford were left to reflect on a 13th qualifier defeat in 14 campaigns.

The visitors were four points up inside three minutes as Graham Guilfoyle, Joseph O’Connor and Nigel Dunne (2) got the visitors off to a fine start.

And when Anton Sullivan made it five points without reply by the sixth minute, the Waterford alarm bells were ringing loudly.

But Waterford rallied, with successive points inside the eighth minute from Mark Ferncombe and JJ Hutchinson bolstering their challenge.

Yet Offaly added two further points from Graham Guilfoyle and Bernard Allen in the 12th and 16th minutes, with both efforts narrowly flying over Sean Barron’s crossbar.

In searing heat, both sides made some poor handling errors, with Offaly particularly guilty of some wayward shooting and seven minutes elapsed before the next score materialised, via the fist of Offaly’s Bernard Allen. But Waterford didn’t cave, as Tommy Prendergast found his range from an acute angle in the 27th minute, before adding a superbly worked goal five minutes later.

A powerful run by corner back Dean Crowley picked out lively substitute Darren Guiry who in turn released Joey Veale to goal from point-blank range.

Waterford goalkeeper Sean Barron brilliantly tipped William Mulhall’s 34th minute shot over the crossbar while in additional time, Patrick Hurney found his range to reduce the host’s arrears to the minimum at the interval, as Offaly led by 0-9 to 1-5.

Offaly were somewhat more relieved at the break, and they clearly used the time well to steady the ship.

A trio of Nigel Dunne points by the 45th minute, met with a sole response by Joey Veale at the opposite end put the Faithful in command, with further efforts from Conor McNamee and Eoin Carroll leaving them five points ahead by the 48th minute.

Liam Lawlor kept Waterford in the contest with a 51st minute point, but Offaly’s greater fitness was in clear evidence in the closing quarter.

Prior to his substitution, impressive Offaly midfielder Graham Guilfoyle struck his third point from play, to the delight of the vocal travelling support.

Nigel Dunne’s fourth point from play in the 64th minute was seen and raised by Anton Sullivan’s goal two minutes later, when his high, inswinging ball was adjudged by an umpire to have been carried over the line by Sean Barron.