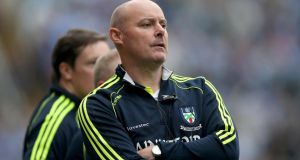 Malachy O’Rourke: Monaghan manager was in charge of Fermanagh when they last defeated Monaghan seven years ago. Photo: Donall Farmer/Inpho

As was always inevitable given the Ulster draw, the spotlight has resolutely stayed focused on the other side to that trodden by this weekend’s semi-finalists’. Donegal’s big performances have contributed to a feeling of irrelevance even though Monaghan’s record against the champions is impressive.

Malachy O’Rourke’s team are on the threshold of the county’s first three successive provincial finals in over 90 years but must first win this semi-final and with their well-rated full back Drew Wylie out for the summer with a knee injury and in the shadow of the first doping suspension handed down within the GAA, albeit to a fringe player.

They’ve had a good season to date, reaching the league semi-finals and running Dublin close and more relevantly for this weekend, winning a claustrophobic battle of wills with neighbours Cavan in Kingspan Breffni Park. This included a close-up view of the abyss, as they trailed by four points in the second half.

Fermanagh have also had a good year and were promoted from Division Three with the best defensive record in the top three divisions and recorded a first Ulster championship win in five years.

Overall they have a good record against their neighbours, having won three of the last five meetings – the most recent seven years ago when, ironically, O’Rourke was managing them before taking over Monaghan.

The issue for Fermanagh will be to what extent they can penetrate one of the most practised defensive systems in the game, cope with the counter-attacking and curb one of the top forwards in the game Conor McManus whose assassin’s instinct kept Cavan at bay.

Their defeat of Antrim was a welcome break out of the doldrums of the past few years but it wasn’t without its caveats. Although Antrim weren’t great and Fermanagh won the centrefield battle, that supremacy only developed after their opponents had lost Seán McVeigh to a red card after half an hour up to which point they were on top.

They have good forwards in Seán Quigley and the Corrigans, although Ruairí is an injury concern. Captain Eoin Donnelly is recovered from injury but this is a big step up.

Monaghan also have a strong bench although it won’t be apparent how strong until the starting line-up becomes apparent. Given that Cavan’s advantages – strong emerging talent and home venue – weren’t sufficient to get them past a misfiring challenge it’s hard to see how Fermanagh can topple the favourites.

1 Six Nations: No place to hide for Ireland’s misfiring captain
2 Questions raised over Ireland v Italy fixture due to coronavirus
3 Panorama show Mo Farah changed account to anti-doping investigators
4 ‘Ireland’s honeymoon period is over’ - buoyant English press reaction
5 All in the Game: how Firmino’s agent made him faster . . . on his laptop
Real news has value SUBSCRIBE

Northern Irish FA ban children aged 12 and under from heading footballs 15:18
Panorama show Mo Farah changed account to anti-doping investigators 14:41
Jack Conan returns to full training ahead of schedule 14:24
Irish Olympic hopefuls fly back from Italy amid coronavirus outbreak 14:12
All in the Game: how Firmino’s agent made him faster . . . on his laptop 14:00
Crossword Get access to over 6,000 interactive crosswords