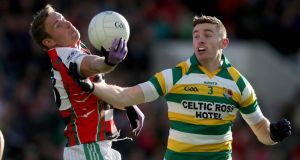 Ballincollig showed character in abundance to capture their first Cork senior football championship title amid remarkable scenes at the end of a pulsating final at Páirc Uí Chaoimh yesterday.

Making their maiden appearance at this stage of the competition, the satellite town overcame a near-disastrous start to both halves and survived almost six minutes of injury-time before eventually savouring the greatest moment in the club’s long history.

There was drama in the fourth minute of added-on time when Carbery Rangers appealed for a penalty after a foot block on John O’Rourke, but referee James Bermingham consulted with his umpires before awarding a ‘45’.

It was dropped into the danger zone and there were some anxious moments for the large Ballincollig contingent before the ball was cleared to safety, bringing an end to a memorable contest.

Ross kicked six points without response in a devastating opening 10 minutes, with captain John Hayes leading by example and Ballincollig looking in danger of being overrun.

A couple of frees from Cian Dorgan seem to settle them, but Ross swept 0-9 to 0-2 in front after 21 minutes. Then the game took a decisive swing in Ballincollig’s direction.

At last they found an answer to the problem of winning possession in the critical middle third and began to dominate.

Six points in as many minutes, including their opening one from play from Dorgan in the 25th, cut the deficit to one point, 0-9 to 0-8, at the break. It was now advantage Ballincollig, who had the elements in their favour on the resumption.

However, Carbery’s Seamus Hayes plundered a goal within 90 seconds of the restart. It all started with a storming run by centre back Padraig Hodnett, whose thunderous shot cannoned back off the crossbar, only for Hayes to react quickest.

Back came Ross to reclaim the lead with a point from substitute Sean O’Neill in the 43rd minute, but it proved to be their last.

Ballincollig substitute Ian Coughlan kicked a couple of frees either side of Dorgan’s sixth point for a 1-12 to 1-10 lead five minutes from the end.

Cork minor defender Cian Kiely swept up field to complete the scoring with a fisted point following a superb move involving Patrick Kelly and substitute Alan O’Donovan in the first minute of injury-time. All that was left was for Ballincollig to survive that late drama.