Minor football final: Kerry in search of two in a row 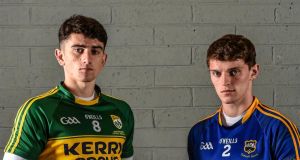 When Kerry and Tipperary meet in this Sunday’s All-Ireland minor final it will only be the third time since the competition began in 1929 that two counties from the same province will face-off in the decider.

It will also be the first time two Munster teams meet with the Tom Markham Cup at stake.

For Tipperary they harboured double dreams of their own for much of 2015 but after their defeat in the minor hurling final to Galway two weeks ago their minds are now firmly focused on securing the football title.

Tipperary actually dominated the second period of that game, ditching their sweeper system, and have since gone on a run in which they have defeated Connacht champions Galway and Leinster champions Kildare.

Not bad for a team who were all but down and out a matter of weeks earlier.

He has now recovered from a knee injury and came on against Kildare.

While Quirke will add to Charlie McGeever’s options around the middle, their go-to men are in the inside line – top scorer Jack Kennedy and the impressive Alan Tynan.

Tynan, a star of the county’s hurling team as well as a talented rugby player (he won the Senior Cup with Roscrea this year), was to the fore in the wins over Galway, when he scored 1-5, and Kildare.

Full-forward Brian McGrath is another dual star set to play a major role this weekend. A younger brother of senior Tipperary hurler Noel, he and Tynan make up two of the eight dual players on the team.

Their manager, ex-Finn Harps player and manager McGreever is a Donegal native turned Clonmel local, and he will be hoping that the hurt of two weeks ago can drive on his team to what would be only a third minor title.

Such is the abundance of talent at Jack O’Connor’s disposal that Kerry have just two player’s remaining from last year’s winning 15.

One of those is Mark O’Connor, who makes his return from injury just in time for the final.

This could be a historic weekend for the Kingdom, even by their standards.