Captain proves fitness with brilliant display in midfield and attack 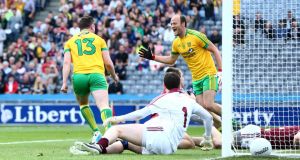 Donegal’s Patrick McBrearty celebrates scoring the opening goal with Colm McFadden during the All-Ireland Round 4B qualifier at Croke Park. Photograph: Cathal Noonan/Inpho

Now, what about that 2013 All-Ireland quarter-final when Mayo decimated a jaded Donegal? It should be closer next Saturday as Michael Murphy disproved concerns about his fitness and the suspected demise of this team with a herculean display that Galway were unable to survive.

It ended with Donegal refusing to let up. That’s as much proof of their continued contender status as anything.

A salient lesson that can only really be learned by experiencing Donegal’s ways and means; when counter-attacking is the winning of a game, there is little advantage in stripping the ball from an attacker if the said ball is not transferred down field before Donegal’s yellow wave seeps back into their own territory.

Galway gathered plenty of Paul Durcan’s kick outs and hunted in packs to stymie off the shoulder runners, but they couldn’t link at the rapid pace necessary to break Donegal.

And still, they were marginally the dominant force as everyone retreated indoors for the interval.

It was level at 1-4 to 0-7 with Donegal kicking five wides to Galway’s four.

Colm McFadden had started like a freight train, Ryan McHugh was buzzing about the middle third and a healthy looking Murphy turned up at midfield for the throw-in. It initially looked like they would envelope Galway with their strategically advanced power game.

Patrick McBrearty’s sixth minute goal gave them a 1-2 to 0-1 lead. That came from calamitous Galway defending. To leave a two on two situation – McFadden and McBrearty against Johnny Duane and Cathal Sweeney – was top of the list of pre-match don’t dos. But Galway did and McFadden fed McBrearty who practically walked it into the Hill end goal.

But Galway chipped away with Gary Sice frees, a Thomas Flynn effort from distance and a great strike from wide left by Paul Conroy.

It helped that Donegal ceased scoring after McBrearty’s point – which really should have been a Frankie McGlynn goal – on 15 minutes. That was the last time Donegal, via a neat Neil Gallagher foot pass, carved up the otherwise disciplined maroon blanket.

Each county had a serious black card scare but Laois man Eddie Kinsella felt it prudent to flash yellow at Sice and then Murphy for high arm fouls.

A black card would have immediately changed this sporting game’s dynamic. A sporting yet utterly drab spectacle unless you were doing a thesis on Donegal’s keep-ball mantra versus Galway’s exercise in defensive discipline. Maybe it’s time for a shot clock.

Gallagher reacted to the malaise by introducing Anthony Thompson for Eamonn McGee and Martin McElhinney for Martin O’Reilly but the wides continued to stack up.

To progress Donegal needed to start winning more ball around the middle without Murphy, who was needed on the square’s edge for when that possession was gathered. This they achieved through McElhinney and others.

Finian Hanley did gift Donegal their first score in 28 minutes when saying something to prompt Kinsella to bring a free into Murphy’s range.

Seconds later Odhrán Mac Niallais landed a beauty from wide left to inch them back in front.

But they remain their own worst enemy; McBrearty brought the wide count up to 10. It finished at 14.

Up stepped Murphy to dominate when it really mattered. He won an impossible ball from behind and over Hanley’s head before pointing. A colossus, no other footballer in the country could repeat his feats with such regularity.

Kinsella’s black card did eventually come. Paddy McGrath was the sacrificial lamb, denying a probably goal when hauling down Flynn.

Sice pointed the free. Considering the stakes at that moment, McGrath can feel justified.

One between them now. There shouldn’t have been; McBrearty was finally replaced by Leo McLoone after posting his fourth wide.

This contest can be narrowed down to Murphy versus Hanley. When the Donegal captain got a rare half a yard on his marker it was enough to draw the foul which led to a McFadden point.

Walsh refused to stand idle; sending in Patrick Sweeney and Shane Walsh but the tables had turned. Galway couldn’t buy a score while Mac Niallais found his hot streak to put three points between them entering the final 10 minutes.

The end came swiftly as Murphy soared over Hanley, a brilliant athlete in his own right, before softly punching possession into Ryan McHugh’s hand. Just as he silenced Dublin last year, McHugh’s dagger was slid low into the net.

That was it. The rest was proof of their soaring fitness levels (McHugh couldn’t stop moving) and evidence of a genuine bench with Christy Toye bagging the third goal in injury time.

The result also confirms Tyrone will face Monaghan in next Saturday’s other quarter-final.