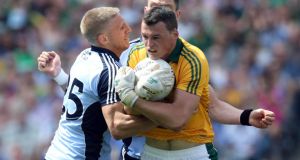 Wherever and whenever football folk huddle in corners to give out about the Dubs getting to play all their games in Croke Park, it’s rare you’ll ever find a Meath voice in amongst it. It’s where they’ve had their best days and it’s where they wish only to have more.

Paddy O’Rourke, for one, would be only delighted to play there the rest of his days. He played his first ever championship match there – against Dublin in 2009 – and he returns to play Kildare there on Sunday.

“It’s better for a goalkeeper,” he says. “The sidelines don’t really come into play unless it’s a wet day and the ball skids off. You can give it a good boot to either wing and be fairly confident it won’t go over the sideline.”

Funny how that’s the first thought for goalkeepers these days. Kick-out strategies pop into their heads before worrying about the wide open spaces giving the opposition more room to get in on goal and force them into making saves. No prizes for guessing who’s responsible for the change in emphasis.

“You do a lot of work on everything,” says O’Rourke. “We have Brendan Murphy training us – he’d take us for our own individual drills and we’d work a lot on kick outs. Especially coming up to championship matches you’d meet before training or stay back after and work with the lads around the middle, as well as the wing-backs and wing-forwards. You work out some strategies and kick-out plans.

“He’s the bench mark. I was at the Dublin v Laois game and when the ball would go wide, next thing a ball is thrown out and it’s on the tee and whether it’s a 15-metre kick to a free man or a 65-metre kick over the midfielders to Paul Flynn or Diarmuid Connolly running into space, it’s deadly accurate. So you can see the work that goes on behind the scenes.”

For a time early on in his Meath career, it looked like his future might be out the field. Seamus McEnaney came in in 2011 and started sticking him in on the edge of the square, a handful in the air and pretty useful on the frees if he was needed. It was an idea that was of its time – it’s fair to say O’Rourke shed very few tears when the experiment was abandoned.

“No,” he smiles. “I’ll never play for Meath outfield again. I think that was a season of madness. At county level it’s definitely going to be where I’ll play for the rest of my career. It seems more natural to be in goals. Nerves or that don’t really affect me coming up to games in goals whereas they would even playing club outfield. When I was outfield with Meath It really got to me with the pressure involved.

“You’d always have the nerves that there’d be people saying, ‘He’s not up to it. He’s only a goalkeeper’. That sort of thing. It came on the back of what happened with the club in 2010 and getting a run in the Leinster club.

“I wasn’t fully driven to any position. That’s why I doubted myself whether I was good enough to be playing to that county standard. It was fairly evident that I was that little bit off it when I did play out the field.”

There has been damn little between Meath and Kildare in his time in green and few expect there to be much to choose on Sunday. O’Rourke has been watching Kildare with interest, in the knowledge that the pair would likely meet at some point.

“I went to their game against Louth and it was kind of the same as us against Carlow in that there wasn’t really much to take from it. They trounced Louth and it wasn’t really a real championship match for the last 20 minutes or so. The game unravelled and there were corner-backs popping up in all parts of the pitch. It got real ragged towards the end.

“So our video analysis will go back over all their league games and the best bits from the Louth game. We’ll all take what we can from it. We’ll watch out for what their forwards do, what’s the preference, where they put their penalties and that kind of thing.